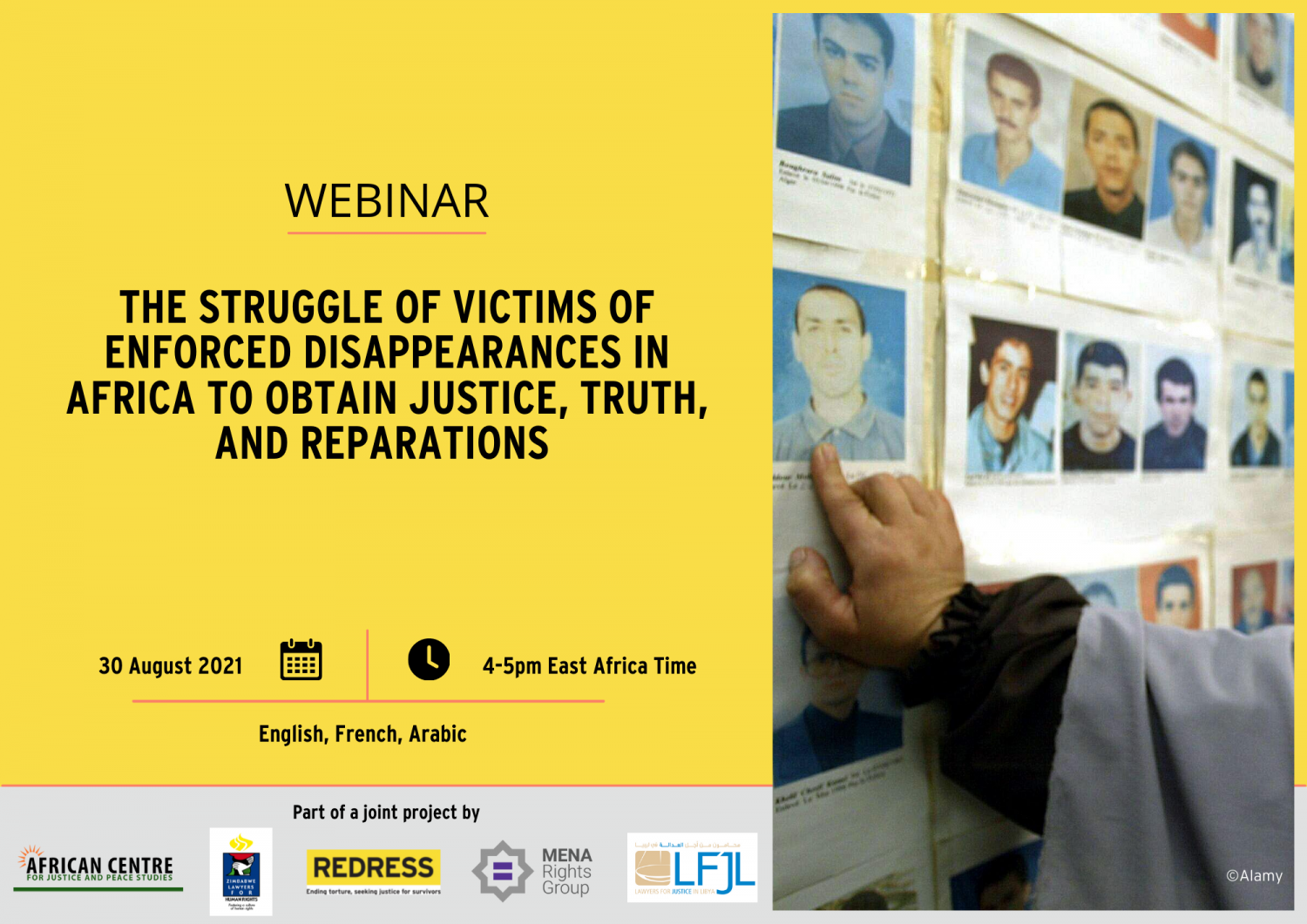 Webinar: The Struggle of Victims of Enforced Disappearances in Africa to Obtain Justice, Truth, and Reparations

Join us for a discussion to mark the launch of our new report ‘The Forgotten Victims: Enforced Disappearances in Africa’, which examines the phenomena of enforced disappearance on the continent and provides recommendations to all relevant actors to prevent the crime and provide justice and reparations to victims. The report is authored by REDRESS with the pro bono assistance of the law firm Linklaters, and it is supported by the findings from REDRESS’ partners Lawyers for Justice in Libya, the African Centre for Justice and Peace Studies, Zimbabwe Lawyers for Human Rights, the MENA Rights Group, and international experts.

The webinar will discuss the report’s key findings, including who the victims and the perpetrators of enforced disappearances are; its impact on women, migrants, and other vulnerable groups; the legal obligations of African states under international and regional legal frameworks to prevent the practice, prosecute the perpetrators, and provide redress to the victims; and the existing legal and policy gaps that need to be overcome to eradicate this practice on the continent.

Victims of enforced disappearances are put outside the protection of the law, frequently tortured, and often end up being killed. For their families, the uncertainty about the fate of their loved ones causes intolerable suffering as they continue to hope for their return. Yet the perpetrators of this heinous crime often go unpunished – widespread impunity and a lack of access to justice for victims remains the norm across the continent.

During the webinar, a select group of panellists will discuss the ways in which the findings of our report, together with other national, regional, and international initiatives, can shape changes in regional standards, national laws, and policies to protect against enforced disappearances and advance accountability efforts in Africa.

REDRESS will also launch its new practice note, which explains what holistic strategic litigation is, and how to do it in the context of enforced disappearances in Africa.

Both the report and the practice note are available in English, French and Arabic.

AUA BALDE, Member of the UN Working Group on Enforced or Involuntary Disappearances

KEVIN MWANGI, expert member of the Working Group on Death Penalty, Extra-Judicial, Summary or Arbitrary Killings and Enforced Disappearances of the African Commission on Human and Peoples’ Rights