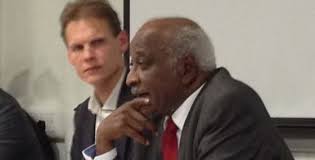 Dr. Medani and Mr. Eissa were human rights defenders in Sudan who were arrested in December 2014. They were arbitrarily detained for over four months, ill-treated, charged with unsubstantiated offences that carried a punishment of the death penalty and subject to an unfair trial. They were released after charges were dropped against them. Their case raises important concerns about the rights and freedoms guaranteed to human rights defenders in Sudan, and highlights the wider practice of arbitrary detention, torture, ill-treatment and other violations against political activists and human rights defenders.

Dr Medani was a distinguished human rights lawyer and Mr Eissa a prominent politician in Sudan. On 6 December 2014 at around midnight, the Sudanese National Intelligence and Security Services (NISS) arrested them at their homes. They were not provided any reasons for their arrests. Immediately prior to their arrest, both of them participated in political negotiations that led to the adoption, on 3 December 2014, of the “Sudan Call: A Political Declaration on the Establishment of a State of Citizenship and Democracy”, an agreement between political opposition parties, rebel movements and civil society to work towards peace in Sudan.

When they were arrested, Dr Medani and Mr Eissa were not charged with any offences. They were held incommunicado at an NISS detention centre for fifteen days in inhumane conditions, without access to any legal assistance or their families. They were not given any information on the reasons for their detention. They were also denied essential medication required for serious health conditions.

In February 2015 Dr Medani and Mr Eissa were charged with a number of unsubstantiated offences, the punishment for some of which was the death penalty. They were subjected to an unfair trial and held for a further 110 days in degrading conditions.

In December 2014, when Dr Medani and Mr Eissa were in incommunicado detention, a collection of African and international human rights organisations, including REDRESS, wrote an open letter to the UN and African Commission on Human and Peoples’Rights Special Procedure mandate holders, denouncing the arbitrary arrest and the incommunicado detention of Dr Medani and Mr Eissa.

REDRESS was deeply saddened to learn that Dr Medani passed away on 31 August 2018. The case before the African Commission is being continued in his name.

REDRESS is working on the case with pro bono support from the law firm Clifford Chance.

The African Centre for Justice and Peace Studies (ACJPS) is a non-governmental organisation that works to monitor and promote respect for human rights and legal reform in Sudan.

The International Federation for Human Rights (FIDH) is an international human rights NGO that defends all civil, political, economic, social and cultural rights as set out in the Universal Declaration of Human Rights.

The World Organisation against Torture (OMCT) is the main coalition of international non-governmental organisations fighting against torture, summary executions, enforced disappearances and all other cruel, inhuman or degrading treatment.

Clifford Chance is one of the world’s pre-eminent law firms, with significant depth and range of resources across five continents.