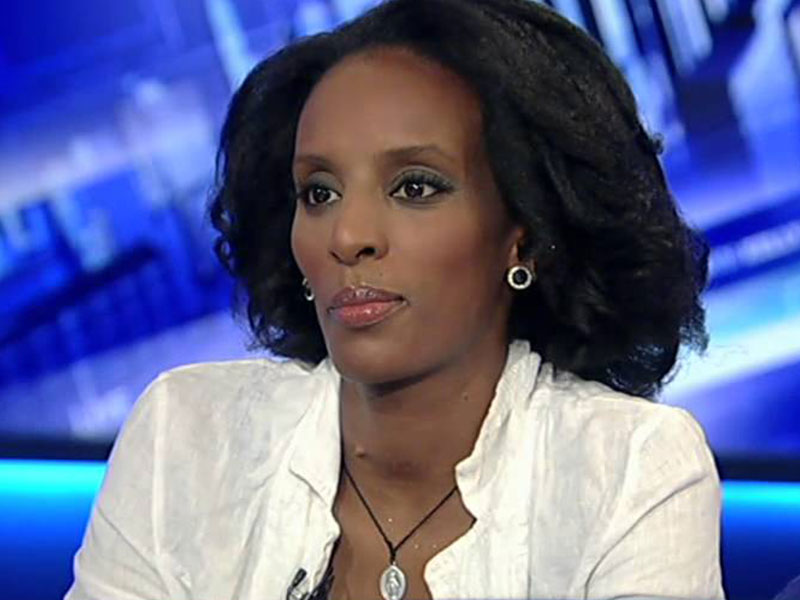 Mariam Yahia Ibraheem was sentenced to death for apostasy and corporal punishment of 100 lashes in Sudan for adultery in 2014 because as a Christian woman and the daughter of a Muslim man, she married a Christian man. She was detained while pregnant in Omdurman’s Women Prison in inhuman conditions with her infant son and following her birth, with newborn daughter, for over four months, most of the time shackled, including while given birth to her.

Mariam Yahia Ibraheem was born to a Sudanese Muslim father and an Ethiopian Christian mother. She was raised as a Christian by her mother without her father being present in their lives. In 2011, she married a Christian Sudanese American man and gave birth to a son in November 2012.

In September 2013, Mariam and her husband were arrested by the public order police in Hilat Koko (Khartoum), following a complaint submitted by someone who alleged to be Mariam’s paternal brother. He claimed that she had committed adultery because of her marriage to a Christian man. Mariam, her son and husband were held at the police station the entire day and were released on bail that night.

In November 2013, the Attorney General indicted Mariam and her husband for adultery. On 24 December 2013, Mariam was arrested again and detained in deplorable conditions, together with her son, at the Haj Yossif police station.

On 6 January 2014, Mariam’s trial for adultery commenced before the Second Magistrate Court and Mariam and her son were transferred to Omdurman’s Women Prison, where they remained until their release on 23 June 2014. Maria was detained while being pregnant, together with her infant son, and following her birth, with her newborn daughter, in inhuman conditions this prison for over four months. She was shackled most of the time and forced to give birth in prison while in shackles, without basic medical care, causing her long-lasting health problems. Mariam was subjected to physical and psychological violence by the prison guards and some imans she was forced to meet with, with the purpose of forcing her to renounce her Catholic faith and convert to Islam.

On 24 February 2014, the Court added the additional charge of apostasy, which in Sudan carries the death penalty.

In May 2014, Mariam was convicted of adultery and apostasy and sentenced to 100 lashes and the death penalty. Mariam’s husband was acquitted of his sole charge of adultery. The judge ordered Mariam to recant her Christian faith within the next three days, on pain of executing the sentence, despite the fact that Sudanese law bans the death penalty from being carried out during a women’s pregnancy (and in the following two years). Mariam refused to recant her faith.

On 22 May 2014, Mariam appealed her conviction. On 23 June 2014, the Court of Appeal revoked her conviction, based on Mariam’s alleged mental status, not exonerating her of either the apostasy or the adultery charges.

On 23 June 2014, Mariam and her children were released from prison. Despite the fact that Islamic extremist groups had gathered outside the prison and were chanting threats against Mariam, she was not offered any protection by the authorities and was left to take public transport by herself with her two minor children.

Due to ongoing threats, Mariam and her family had to seek refuge at the Embassy of the United States in Khartoum. They were forced to flee to the US as refugees in July 2014, leaving all their possessions behind.

This case takes place in a context of discrimination based on gender and religion and raises important concerns on the lack of due process and the need for legislative and policy reforms that fully protect the rights of women in Sudan.

On 2 June 2014, REDRESS, the African Centre for Justice and Peace Studies (ACJPS), the Sudanese Organisation for Development and Rehabilitation (SODR), the Sudanese Human Rights Initiative (SHRI) and the Justice Centre (JCALC) submitted a complaint and a request for provisional measures to the African Commission on Human and Peoples’ Rights (ACHPR).

On 10 June 2014, the above organisations sent a further request for an Urgent Appeal to the ACHPR, urging the Commission to publicly call on Sudan to comply with its obligations under the African Charter on Human and Peoples’ Rights.

Upon Mariam and her family’s release and travel to the US in July 2014, the organisations informed the ACHPR that provisional measures were no longer required.

On 3 October 2014, the organisations submitted arguments and observations on the admissibility of the case to the ACHPR.

In May 2019, the ACHPR declared the case admissible.

On 20 February 2020, the organisations submitted arguments on the merits to the ACHPR, arguing that Sudan had violated Mariam’s and her family’s rights to life, liberty, dignity, freedom of religion, family life, freedom of movement and a fair trial, among other violations of the African Charter.

Mariam was released on 23 June 2014, after winning an appeal before a domestic court. The organisations then informed the ACHPR that provisional measures were no longer required.

In May 2019, the ACHPR found the case admissible. The decision on the merits of the case is pending.