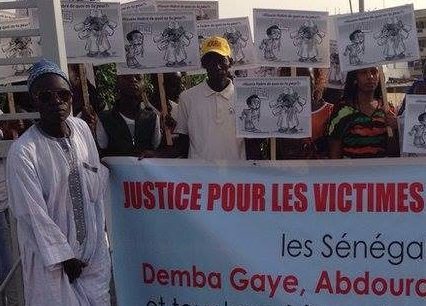 7,000 victims of the Habré regime turn to the African Court to seek enforcement of landmark reparation judgment

7,000 victims of the Hissein Habré regime have requested the African Commission on Human and Peoples’ Rights to refer to the African Court a complaint that they filed at the Commission last year.

The complaint seeks the enforcement of a landmark judgment from 2015 that awarded approximately $125million USD to the victims and ordered the Chadian government to pay half of that amount.

The claimants also requested the African Commission to proceed to examine the complaint on the merits if it decided not to submit the case to the African Court. The requests were made in a new submission on admissibility on 13 November 2018.

A 1992 Chadian Commission of Inquiry accused Hissein Habré’s government of systematic torture and estimated that 40,000 people died during his rule (1982-1990) in Chad.

Habré’s dictatorship was marked by widespread atrocities, including systematic torture, widespread political killings, thousands of arbitrary arrests, sexual slavery and the targeting of the civilian population, including specific ethnic groups.

To this day many families still do not know where their loved ones were buried and survivors are still living with permanent physical and psychological reminders of their ordeal. It is estimated that Habré’s brutal regime left 80,000 orphans, more than 30,000 widows and more than 200,000 people without moral or material support.

Victims filed a complaint in Chad on 25 October 2000 against security agents for torture, murder and disappearances. While the process was continuously delayed, more and more victims joined the proceedings until 7,000 victims constituted themselves as civil parties before the Special Criminal Court of N’Djamena. The Court delivered its verdict on 25 March 2015.

On 25 March 2015, in a landmark judgment, the Special Criminal Court of N’Djamena convicted then twenty security agents for their involvement in murder, torture, barbarism and other human rights violations committed during the Habré regime. It awarded approximately $125million USD in compensation to 7,000 victims who participated in the proceedings as civil parties.

Finding that Chad was responsible for the acts of the security agents, it ordered the convicted perpetrators and the government to each pay half of the award of compensation. It ordered for a Commission to be established to oversee the implementation of its judgment, chaired by the Prime Minister.

More than three years later, the Government of Chad has failed to comply with the Court’s judgment, preventing victims who have waited for decades, from receiving reparation for the crimes committed against them during the Habré regime from 1982 to 1990. The Government has yet to establish the Court ordered Commission on implementation.

Read more about the case here