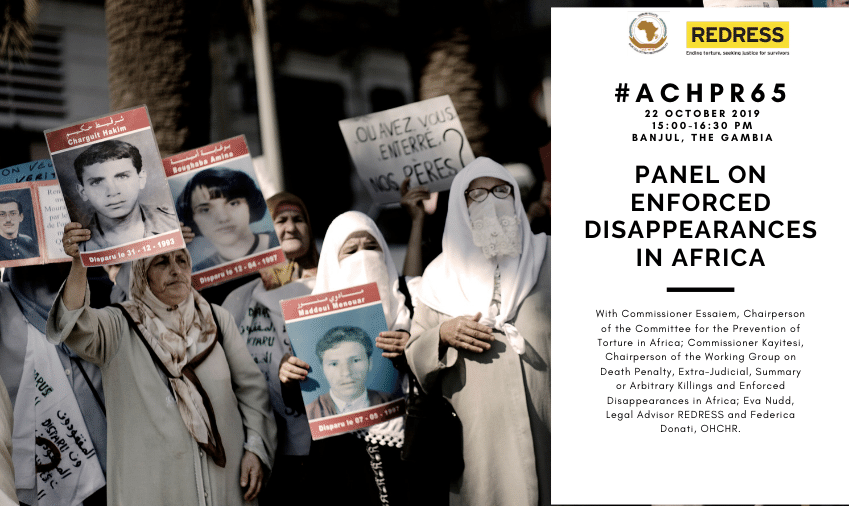 Enforced disappearances in Africa will be the focus of a panel that will take place today during the 65th ordinary session of the African Commission on Human and People’s Rights.

The panel is being organised by REDRESS jointly with the Committee for the Prevention of Torture in Africa (CPTA) and the Working Group on Death Penalty, Extra-Judicial, Summary or Arbitrary Killings and Enforced Disappearances in Africa

In many conflicts in Africa, from the Algerian civil war in the 1990s, Libya under Muammar Gaddafi, Sudan during the civil war, and Zimbabwe under Robert Mugabe, opponents of the government or people just in the wrong place at the wrong time, have disappeared. More recently, dozens of protestors, human rights defenders and professionals in Zimbabwe and Sudan demanding political changes have also being subjected to enforced disappearances.

The victims of these enforced disappearances are often tortured, and their family are left behind with no information on the whereabouts or fate of their loved one.

The scale of the problem is not adequately captured in the African continent, due to gaps in understanding, absence of the necessary legal framework, and lack of accurate statistics.

Furthermore, there is no regional instrument in Africa that can enhance understanding of the concept and provide practical measures to ensure its prohibition and prevention. Only 16 African States have either signed or ratified the International Convention on the Protection of all Persons from Enforced Disappearance. Many African states lack the necessary framework to investigate, prosecute and provide reparations to victims of enforced disappearances.

Joining the panel will be Commissioner Essaiem, Chairperson of the Committee for the Prevention of Torture in Africa; Commissioner Kayitesi, Chairperson of the Working Group on Death Penalty, Extra-Judicial, Summary or Arbitrary Killings and Enforced Disappearances in Africa; Eva Nudd, REDRESS Legal Advisor on Enforced Disappearances in Africa, and Federica Donati, Coordinator of the Equality, Non-Discrimination and Participation Unit of the Office of the United Nations High Commissioner for Human Rights, and a human rights defender from Libya.

Adopting a victim-centred approach, REDRESS is working with partners in Algeria, Sudan, Zimbabwe, and Libya to support human rights lawyers to bring cases challenging enforced disappearance, and to highlight this particular problem to the African Union and specific governments.