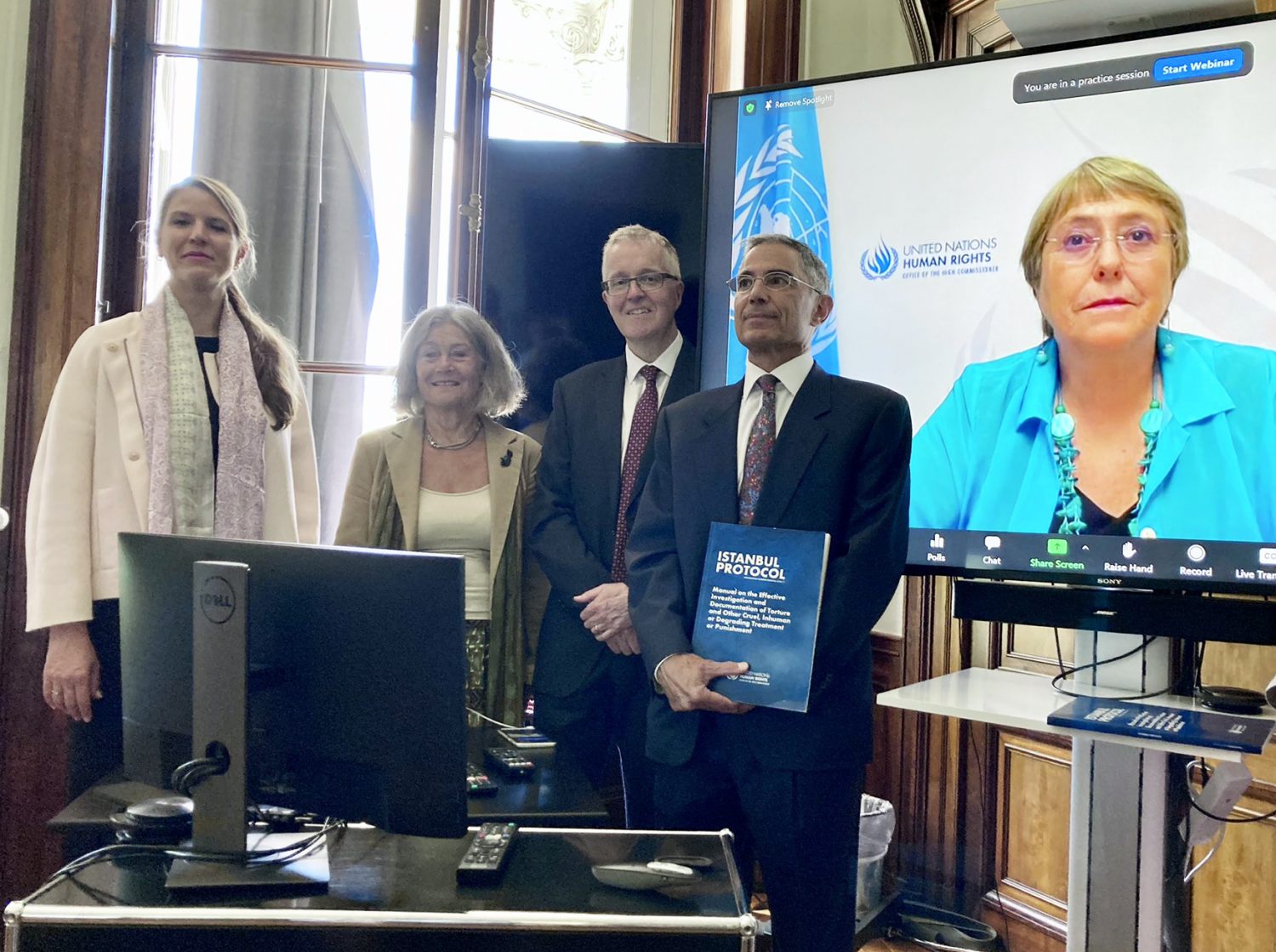 The Office of the United Nations High Commissioner for Human Rights (OHCHR) today published the 2022 edition of the Istanbul Protocol: Manual on the Effective Investigation and Documentation of Torture and Other Cruel, Inhuman or Degrading Treatment or Punishment with contributions from more than 180 anti-torture experts from 51 countries. The new edition of the Istanbul Protocol is strengthened with lessons learned from 20 years of implementation experience, providing critical guidance to States to ensure they fulfil their treaty obligations to investigate, prosecute, and punish torture under the UN Convention against Torture (UNCAT) and international law.

Since its official endorsement by OHCHR in 1999, the Istanbul Protocol’s standards have been adopted by international, regional, and national human rights bodies and legal mechanisms and have served as the global standards for investigations into allegations of torture and ill-treatment. The Istanbul Protocol has informed countless medico-legal investigations conducted by both State and non-State actors into torture worldwide. It has served as a guide to clinicians in best practices for their conduct and documentation of medico-legal assessments of individuals alleging torture and/or ill treatment. The Istanbul Protocol has shaped a broad range of anti-torture activities including advocacy, training and capacity building, policy reform, prevention, and treatment, and rehabilitation of torture survivors.

The update was led by representatives of four civil society organisations; (Physicians for Human Rights, the International Rehabilitation Council for Torture Victims, the Human Rights Foundation of Turkey, and REDRESS); and the four core United Nations anti-torture bodies (the Committee against Torture, the Subcommittee on Prevention of Torture, Special Rapporteur on Torture, and the United Nations Voluntary Fund for Victims of Torture). The updated Istanbul Protocol is the culmination of a six-year process, including regional coordination meetings in Bishkek, Mexico City, and Copenhagen, and a survey of more than 200 individuals who have substantial experience using the Protocol in anti-torture activities.

In addition to updating the six original chapters of the Istanbul Protocol, the 2022 edition includes two new chapters which provide guidance on the role of health professionals in various contexts in which documentation may be necessary (chapter VII) and guidance on the necessary conditions for effective implementation of the Istanbul Protocol by States (chapter VIII).

“The Istanbul Protocol has transformed how we understand, investigate, document, and work towards the eradication of torture around the world,” said Dr. Vincent Iacopino, Istanbul Protocol Editorial Committee Member, former Medical Director and current Advisory Council member at Physicians for Human Rights, and Adjunct Professor of Medicine at University of Minnesota Medical School. “Nearly 75 years after world governments agreed to prohibit torture, these heinous practices continue in more than half of the world’s countries, often with impunity. We call on all States to fully implement these standards and meet treaty obligations to prevent torture and ill-treatment, hold perpetrators accountable, and afford victims the redress and rehabilitation they are entitled to under international law.”

“The strengthened Istanbul Protocol will be a vital resource for survivors, clinicians, litigators, governments, and civil society, bolstering our collective work towards a world free of torture,” said Jens Modvig, Istanbul Protocol Editorial Committee Member, former Chair at Committee against Torture, Director of the Health Department at Dignity – Danish Institute against Torture, and Head of the International Accountability Platform for Belarus. “It also provides an international point of reference to prevent neglect, misinterpretation, or falsification of torture evidence by health professionals, either willingly or under coercion.”

“The extent to which States implement Istanbul Protocol standards should be considered a measure of their commitment to ending torture and other ill-treatment,” said James Lin, Istanbul Protocol Editorial Committee Member, Istanbul Protocol Programme Coordinator at the International Rehabilitation Council for Torture Victims, and Adjunct Professor of Law at National Yang Ming Chiao Tung University.

“The OHCHR remains committed to assist States to eradicate torture and ill-treatment, to implement international human rights standards effectively and to place redress for victims, including rehabilitation, at the centre of their efforts. I therefore encourage States and non-State actors, civil society, individual practitioners and everyone concerned in preventing and protecting against torture and ill-treatment to use the new edition of the Istanbul Protocol.”

Key updates and additional guidance in the Istanbul Protocol 2022 edition include:

The 2022 edition of the Istanbul Protocol will be made available for download in all six official United Nations languages on the website of the OHCHR: https://www.ohchr.org/en/publications/policy-and-methodological-publications/istanbul-protocol-manual-effective-0.

Nora Sveaass, Professor Emerita, University of Oslo; member, Subcommittee on Prevention of Torture and Other Cruel, Inhuman or Degrading Treatment or Punishment