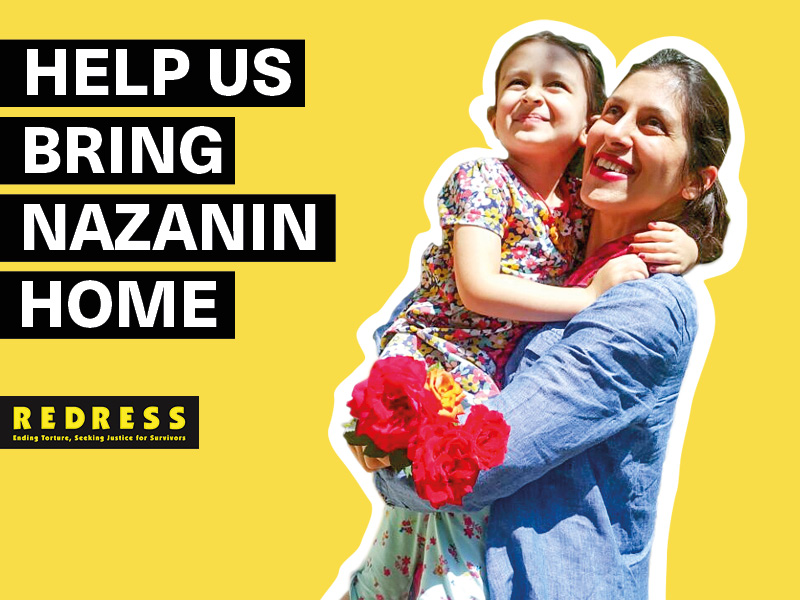 For more than three years Nazanin Zaghari-Ratcliffe has been arbitrarily detained in Iran, separated from her now five-year-old daughter Gabriella and her husband Richard, who lives in London. Nazanin and Richard recently underwent a two-week hunger strike to call once again for her release.

More needs to be done to bring Nazanin, and others like her, home.

REDRESS is launching a crowdfunding campaign today to raise an initial £15,000 to continue our legal and advocacy work on Nazanin’s case, and cases like hers. The funds will help us continue to engage the UK Foreign Office and advocate on key cases to advance our efforts to make the UK’s consular work more transparent and predictable for the individuals and families concerned.

We will engage with the United Nations to ensure that they speak out on her behalf, and hold countries like Iran to account. We will continue to work with MPs and others with influence to get them to help even more. We will explain her case, and others, to those who can intervene, and to general public.

Through this work we can have a real impact on Nazanin’s case, and help stop the same thing from happening to others.

REDRESS has acted for Nazanin and her husband Richard since 2016, bringing her case to the United Nations and advocating to the UK Foreign and Commonwealth Office to take action and to assert diplomatic protection on her behalf. In March 2019 the Foreign Secretary did so, meaning that the government recognises her as predominantly British, and that her ill-treatment and continued arbitrary detention is now a dispute between the UK and Iran. This is the first time that the UK has ever done this in a human rights case.

REDRESS has also worked with many torture survivors who, like Nazanin, have been arbitrarily detained and suffered mistreatment abroad. Her case is one of over a hundred cases each year in which British nationals say that they have suffered serious human rights violations abroad such as unlawful arrest and detention, unfair trials or torture and ill-treatment.

These torture survivors need all the help we can give them, and it is vital that we continue to put constant pressure on the UK and the governments responsible to afford them redress.

Your support can make a difference. Please donate to this campaign on JustGiving here and share this page with your friends, family and on social media.