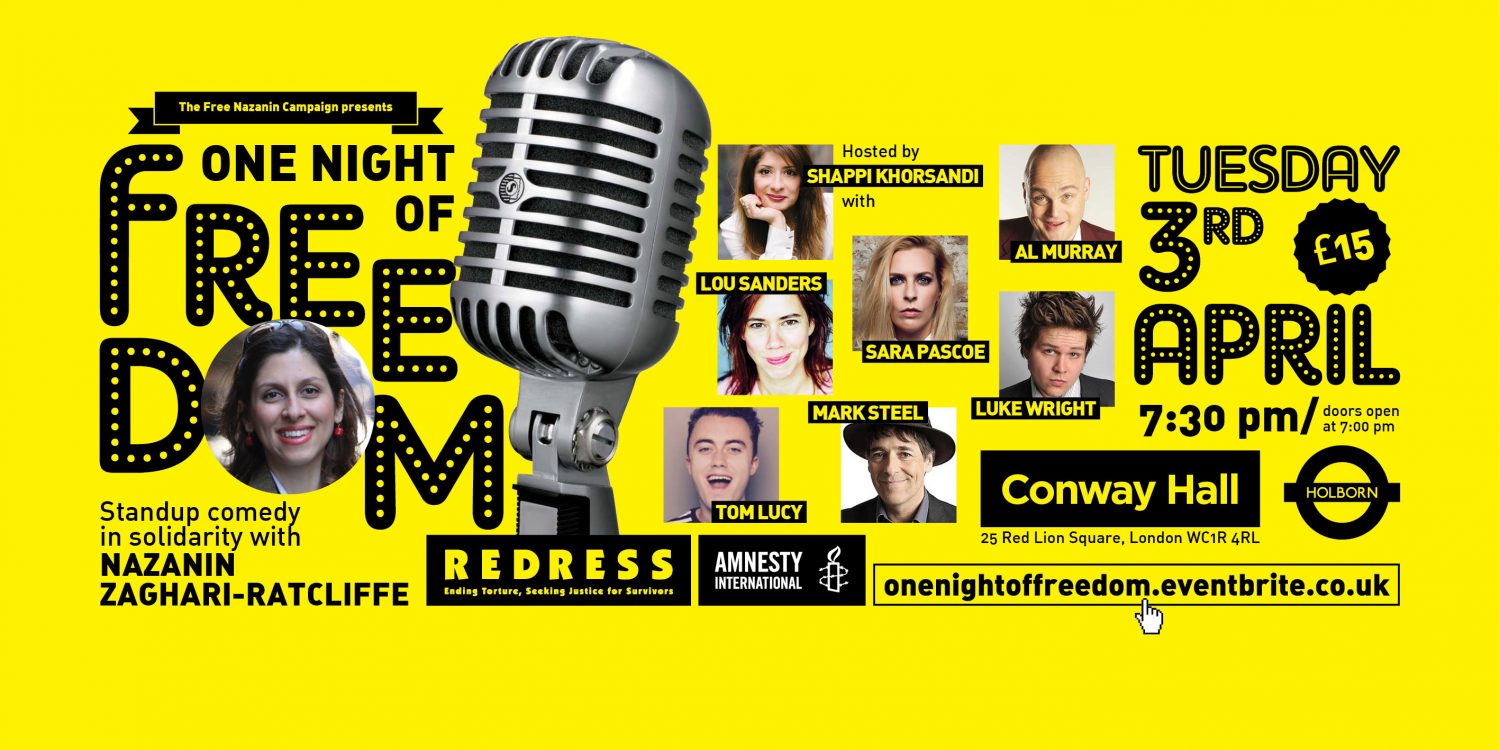 One Night of Freedom: comedy event in solidarity with Nazanin Zaghari-Ratcliffe

Join AL MURRAY, SARA PASCOE, MARK STEEL and SHAPPI KHORSANDI and more great acts for “One Night of Freedom” — a night of spectacular standup comedy to show solidarity with Nazanin Zaghari-Ratcliffe on the second anniversary of her detention in Iran.

Yes, it is a sad day but as her husband Richard Ratcliffe puts it:

“Laughter is a kind of freedom. Even in prison, it’s important to keep your spirits up, for Nazanin and the other women important to briefly forget their woes. It is something we can do in the outside world – to share what makes us smile, to remind them there is an outside, there are reasons to smile, that laughter keeps us human. Every day, for the one day to come.”

Nazanin Zaghari-Ratcliffe is a British-Iranian national who was arbitrarily arrested in Tehran on 3 April 2016 when returning to the UK from a family holiday with her young daughter Gabriella. Following an unfair trial conducted in secret, she was sentenced to five years’ imprisonment for unspecified national security crimes which has resulted in a serious deterioration of her mental and physical health. She remains in prison, separated from her now three-year-old daughter and her husband.

All proceeds from this event will go to The Redress Trust, Amnesty International UK Section Charitable Trust and other organisations working with the Free Nazanin Campaign.

REDRESS is a leading human rights organisation which has been working closely with Nazanin’s husband Richard to secure her freedom. REDRESS has taken Nazanin’s case to the United Nations and has urged the UK to take action in order to bring her home.

Amnesty International is a global movement of over 7 million people and the world’s largest grassroots human rights organisation. Standing up for individuals and families who have had their human rights violated is at the heart of what we do. We have been working closely with Nazanin’s husband Richard and have mobilised tens of thousands of people across the UK to support Richard’s campaign for her release.