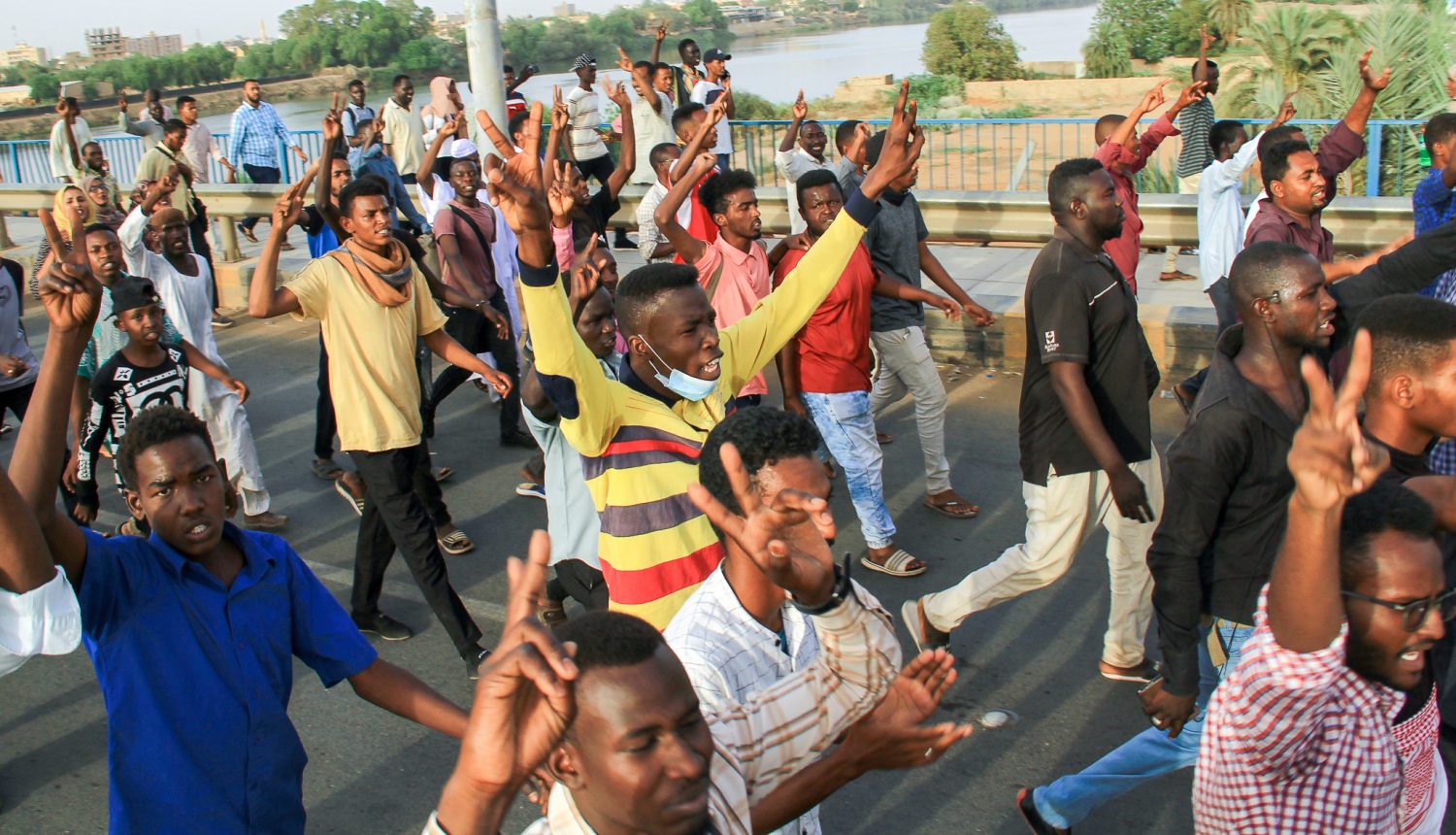 Justice for Darfur victims should be swift and effective

The Victims’ Rights Working Group (VRWG) calls upon the international community to exert maximum effort to ensure that ousted Sudanese President, Omar al-Bashir, and the other suspects against whom arrest warrants have been issued for crimes in Darfur, Sudan, by the International Criminal Court (ICC), are expeditiously surrendered to the Court. The VRWG, an international network of organizations working on victims’ issues before the ICC, contend that victims in Darfur have waited long enough for justice and accountability for these crimes.

Al-Bashir was overthrown as President in April 2019 during a military coup in Sudan, ending decades of autocratic rule characterized by gross human rights abuses. He has since reportedly been charged by Sudanese prosecutors with crimes of murder and undermining the constitutional regime and is being investigated for other charges such as money laundering and financing of terrorism.

Since then the political situation in Sudan has continued to deteriorate with reports of violence perpetrated against civilian protestors including horrific acts of sexual violence. On 6 June, the African Union (AU) suspended Sudan with immediate effect in response to the crackdown by government forces against peaceful protesters in Khartoum leading to the death of over 128 persons. The violence has reportedly spread to other regions beyond Khartoum.

On 19 June, ICC Prosecutor Fatou Bensouda called for the support of the United Nations Security Council and the cooperation of the authorities in Sudan to ensure accountability and justice for the victims in the Darfur situation, which has been ongoing for more than 14 years. Given the current political uncertainty in Sudan and the continued violations against the Sudanese people, the VRWG considers it essential to ensure that those who are wanted by the ICC do not escape justice and accountability.

“We fully support the call by the Prosecutor of the ICC for Omar al-Bashir and other Sudanese suspects who are wanted by the Court, to be surrendered to the ICC without delay,” said Dr. David Donat Cattin, Secretary-General of Parliamentarians for Global Action, one of the VRWG’s member organisations.

Dr. Cattin continued: “Prosecution of these suspects before the ICC does not prevent Sudanese authorities from trying them for ordinary offenses under national law as long as the underlying facts are different. The issue is one of sequencing. Sudanese authorities should cooperate with the Prosecutor to ensure that all the suspects are held accountable for the crimes charged before the ICC as well as in Sudan.”

Raymond Brown and Wanda Akin of the International Justice Project (another VRWG member), which represents Sudanese victims in the cases before the ICC, said: “It is crucial that the international community tangibly supports the Sudanese people in their continued fight for a peaceful transition to democratic governance. Ensuring justice and accountability for Darfur’s victims are vital first steps in building sustainable peace.”

Brown and Akin added: “Omar al-Bashir, Abdel Raheem Hussein, Ahmad Harun, Ali Kushayb and Abdallah Bandashould should not escape justice. They should face justice for the atrocious crimes that they allegedly have committed against the Sudanese people. This cycle of impunity must end. Anything less would be an affront to the thousands of victims of those crimes who have waited for decades for justice to be done.”

The VRWG calls upon the following key stakeholders and the broader international community to act immediately to secure the rights and interests of victims affected by the protracted human rights violations in Sudan and the people of Sudan:

Omar al-Bashir and the other Sudanese suspects, namely Abdel Raheem Hussein, Ahmad Harun, Ali Kushayb and Abdallah Banda should be brought to trial before the ICC or other competent court for the serious international crimes committed in Darfur. These suspects should be surrendered to the ICC unless another competent court exercises jurisdiction in respect of the crimes for which they are charged before the ICC and a successful challenge to the cases’ admissibility at the ICC under Article 17 of the Rome Statute is made. Justice and accountability are important parts of the ongoing process of ending impunity and securing democratic transformation in Sudan.

To other states and the broader international community

In this regard, it is important to recall the decision of the ICC Appeals Chamber on 6 May 2019, which affirmed that Jordan violated its obligations under international law in failing to arrest al-Bashir during his 2017 visit to Amman. We also wish to note that while surrendering al-Bashir and others wanted for international crimes to the ICC will begin the process of bringing justice to Sudan, it will not complete it.

To the current Sudanese leadership

We call upon the current and future leadership of Sudan to fully cooperate with the ICC by surrendering Omar al-Bashir, Raheem Hussein and Ahmad Harun who are reportedly currently detained in Sudan to the Court; to spare no effort to arrest and surrender those still at large, Mr Ali Kushayb and Mr Abdallah Banda; and where requested, to facilitate any further investigations which the ICC Prosecutor may need to undertake.

To the African Union

We call upon the AU Peace and Security Council to ensure a meaningful and sustainable solution to the crisis in Sudan including support for a peaceful transition to democratic governance and full accountability for the alleged grave crimes committed.

The success of the proposed transition in Sudan depends on how stakeholders address the concerns of victims of human rights violations. Paramount among these concerns is cooperation with the ICC and other mechanisms of international justice. This, in our view, would be concomitant with justice and the broader peace and justice goals of the AU.

This statement is issued by the VRWG and has been developed through collaboration among the following member organisations:

Group Project for Holocaust Survivors and their Children

The VRWG is a network of over 300 national and international civil society groups and experts created in 1997 under the auspices of the Coalition for the International Criminal Court (CICC). It was created by a number of international NGOs and experts but over the years has evolved to include NGOs from a wide array of countries including those countries most affected by the ICC, such as the Central African Republic, the Democratic Republic of Congo, Ivory Coast, Kenya, Libya, Sudan and Uganda. The VRWG is facilitated by the international human rights organization REDRESS.

The VRWG works to ensure that victims’ rights are effectively protected and respected, and that their needs and concerns are met throughout the ICC’s judicial process.

The VRWG played a historic role in ensuring that key provisions for victims were incorporated into the Rome Statute. Members’ expertise and work with governments in the run up to the Rome Conference in 1998 led to strong measures respecting victims’ dignity, ensuring their support, protection, and assistance, and allowing their ability to participate in proceedings, be legally represented and to claim reparation.

In December 2018 protests erupted in Sudan over emergency austerity measures introduced by al-Bashir’s government including cuts to food and fuel subsidies. While initially focused on the rising costs of food and fuel, the protests quickly widened into demands for al-Bashir’s removal and a comprehensive transformation to civilian rule and democracy. Leadership in the demonstrations came from the Sudanese Professionals Association (SPA), consisting of lawyers, doctors, and other healthcare workers. The BBC has reported that the proportion of women in the demonstrations could be as high as 70%.

On April 11, 2019, al-Bashir was overthrown in a military coup led by many of his own generals and high-ranking officers, who then announced a military “Transitional Government” they said would last for two years. Initially, Lieutenant General Ahmed AwadIbn Auf, who has been sanctioned by the United States in part for his role in the commission of international crimes in Darfur, was named as the leader of the new government. Auf, however, resigned after only one day in office, naming Lieutenant General Abdel Fattah Abdelrahman Burhan as his successor. Less is known about Burhan as, though he has long been a member of the inner circle of Sudan’s military high command, he has not previously been a very public figure. Prior to becoming Inspector General of the Army in February 2019, Burhan was the Commander of Ground Forces.

Since coming to power in 1989, the regime of al-Bashir presided over serious violations of human rights, including unlawful or arbitrary killings, forced disappearances, torture, and arbitrary detention, all by security forces; harsh and life-threatening prison conditions; political prisoners; substantial interference with the rights of peaceful assembly and freedom of association, such as overly restrictive nongovernmental organization (NGO) laws; restrictions on religious liberty; restrictions on political participation; corruption; lack of accountability in cases involving violence against women, including rape and female genital mutilation/cutting (FGM/C); trafficking in persons; and child labour among others.

In addition, the regime has presided over violent assaults on civilians in conflict areas including South Sudan, Darfur, South Kordofan and Blue Nile, which some, including the Office of the Prosecutor of the ICC, have characterized as genocide. In Darfur, an estimate 400,000 people died, countless women were systematically raped, and around 3 million people were forced from their homes.

Former President Omar al-Bashir was charged with genocide, war crimes, and crimes against humanity before the ICC. Arrest warrants were issued in 2009 and 2010. He has remained at large for over a decade. Others charged by the ICC for alleged crimes in the Darfur conflict are Ahmad Muhammad Harun, Ali Muhammad Ali Abd-Al-Rahman (also known as Ali Kushyab), and Abdel Raheem Muhammad Hussein from the government side. On the rebel side three were charged by the ICC: Saleh Mohammed Jerbo Jamus (charges were terminated against him following his death), Abu Garda (charges were not confirmed by the Pre-trial Chamber) and Abdallah Banda Abakaer Nourain (arrest warrant was issued for failing to appear for the continuation of his trial).

Throughout al-Bashir’s rule, the Government of Sudan consistently denied the legitimacy of the Court, in contravention of UNSC 1593, which requires Sudan to cooperate fully with the ICC. During this time, he visited both ICC and non-ICC member countries including Algeria, Chad, China, Democratic Republic of Congo, Djibouti, Egypt, Eritrea, Ethiopia, India, Iran, Iraq, Kenya, Kuwait, Libya, Malawi, Mauritania, Nigeria, Qatar, Saudi Arabia, South Africa, South Sudan, and Jordan. On 6 May 2019, the Appeals Chamber of the ICC affirmed that Jordan, an ICC member, was in violation of its obligations under international law when Jordanian authorities failed to arrest al-Bashir while he was in Amman in 2017.

On 6 June, the AU suspended Sudan’s membership “with immediate effect” amid an upsurge of violence against civilians in which over 100 civilians were killed. The AU has warned of further punitive action if power is not transferred to a Civilian-Led Transitional Authority, as the only way to allow Sudan to exit from the current crisis.

On 19 June, in her statement to the UN Security Council, the Prosecutor of the ICC called for the surrender of al-Bashir and the other four suspects for which arrest warrants were issued by the Court. The Prosecutor noted that “Sudan remains under a legal obligation to transfer these suspects to the ICC to stand trial, unless it can demonstrate to the Judges of the International Criminal Court that it is willing and able to genuinely prosecute them for the same cases.” She also expressed willingness to engage in dialogue with the authorities in Sudan to ensure that the Darfur suspects face independent and impartial justice, either in a courtroom in The Hague, or in Sudan.