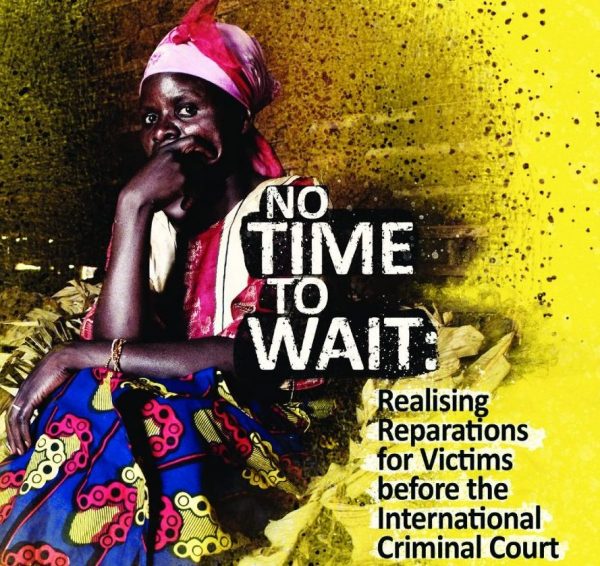 New report: No time to wait: Realising the right to reparations for victims before the International Criminal Court

With reparations awards made in three cases before the International Criminal Court (ICC) (Lubanga, Katanga and Al Mahdi) and submissions on reparations in the Bemba case prior to his acquittal last year, a new REDRESS report evaluates the progress made so far by the ICC to deliver meaningful and timely reparations for victims of the worst international crimes.

No time to wait: Realising Reparations for Victims before the International Criminal Court highlights the Court’s efforts and challenges in bringing to life the progressive reparations provisions enshrined in its legal texts.

The report applauds the progressive steps that the ICC has taken in consolidating its case law on reparations, clarifying procedural issues, and adopting a victim-centric and consultative approach to determining reparations awards. However, the report also finds that, despite the Court’s best efforts, delivering reparations for victims has become a complicated and protracted process that has yielded little tangible results for victims.

Victims have spent several years waiting for justice and reparations and to date only a fraction of the victims who have either applied for or are eligible to receive reparations have seen any real benefits, despite reparations awards of millions of euros or US dollars. In the Lubanga case from the Democratic Republic of the Congo, for example, 15 years after the crimes were committed, victims in that case are yet to receive the reparations they have been waiting for, even though the first reparations decision was handed down in 2012.

REDRESS’ findings point to a combination of factors that impede the ICC’s ability to deliver promptly reparations to victims, including inconsistent judicial approaches; capacity and planning challenges at the Trust Fund; lack of court-wide strategic direction on reparation; and the absence of comprehensive guiding principles binding on all Chambers that help to foster a coherent and consistent approach to reparations.

In a series of recommendations, REDRESS calls upon the Court to strengthen its processes, to move beyond procedural debates and to establish a timetable for effective and timely delivery of reparations awards. The report recommends more effective management and oversight of the implementation phase of reparations and the development of a court-wide strategic framework governing reparations.

The report calls upon the Trust Fund to improve its internal capacity and planning to better prepare draft implementation plans and to implement reparations awards ordered by the Court. The Trust Fund is also urged to expand its assistance programmes to other countries where the ICC is active and to begin much earlier to provide assistance to victims in cases that are unduly protracted.

Lorraine Smith van Lin, Legal Adviser at REDRESS, said: “Victims have waited long enough for the ICC to work out procedures. It is time for the Court to put more emphasis on action and take tangible steps to promptly deliver reparations to victims that can make a real difference in their lives.”

The report is being launched at an invitation-only event at the Residence of the Ambassador of Finland in The Hague on 21 February 2019, which will feature a panel with international experts on reparations for victims before the ICC.

Over a period of ten months, REDRESS canvassed the views of key stakeholders in the reparations process including ICC staff, staff of the Trust Fund for Victims and the Office of Public Counsel for Victims (OPCV), academics, civil society and legal experts. REDRESS also extensively reviewed the ICC legal texts, filings, judicial decisions, policy papers and academic commentary on reparations at the Court. No victims were directly consulted for this report. The perspectives of victims were indirectly provided via their legal representatives. In October 2018, REDRESS convened an Expert Roundtable meeting on reparations in The Hague. Participants included staff of the ICC Registry, Office of the Prosecutor, legal representatives of victims, OPCV, case managers, academics, legal experts from the Democratic Republic of Congo, and representatives of civil society organisations. In addition, in December 2018, REDRESS organised a side-event on reparations during the 17th Assembly of States Parties meeting in The Hague co-hosted by Finland, Sweden, Switzerland and Chile. The rich discussions from both events have also informed the findings and recommendations of this report.

States have an obligation to provide redress to victims of torture. This often takes the form of reparations, which are measures that try to address the wrongs suffered by victims of human rights abuses. There are many forms of reparation, including finding the truth, assigning responsibility, and prosecuting the perpetrators. Reparation also means compensating victims for the costs of their medical care and to support them to rebuild their lives. Measures that prevent repetition of the torture are also crucial. All of which can help to restore the dignity of the survivor of torture.

REDRESS uses the law to seek justice and reparation for survivors of torture, to combat impunity for governments and individuals who perpetrate torture, and to develop and promote compliance with international standards. We bring legal cases on behalf of individual survivors, and advocate for better laws to provide effective reparations. REDRES supports the progressive development of the ICC as an institution that complements national trials to deliver justice for victims of international crimes, with a focus on victims’ rights, including participation, protection, legal representation, and reparations. We intervene directly before the ICC and engage with the Registry and the Trust Fund for Victims to progress their policies and implement reparations for victims. We also engage with domestic and hybrid war crimes trials under the principle of complementarity, and coordinate the Victims’ Rights Working Group, an informal global network of experts and advocates working to promote justice for victims of international crimes.