Enforced disappearance is a crime that thrives in contexts where there is a lack of public scrutiny of the government and its actions. Because of this, the media has a vital role to play in eradicating the use of enforced disappearance, a particularly cruel human rights abuse that is prevalent in Africa, frequently used by governments as a method of repression, terror, and stifling dissent. Journalists can help expose when it takes place, raising public awareness of the practice, which in turn forces accountability in government.

However, journalists covering enforced disappearance face many challenges, including lack of official data and the risk of being subjected to human rights abuses themselves. This is why REDRESS and partners have published our Q&A for Journalists Covering Enforced Disappearance in Africa.

The Q&A addresses the main contexts in which it happens,  who it affects and who its perpetrators are, and offers guidance on how to mitigate risks for victims and journalists when reporting on enforced disappearance. It signposts organisations offering training especially geared towards journalists, covering subjects like safety and security, and dealing with stress both during and post reporting. Also included is information on key terminology and concepts, and further advice on how to conduct interviews with its victims and their families.

Available in English, Arabic, and French. 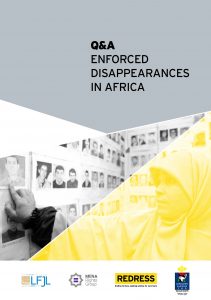