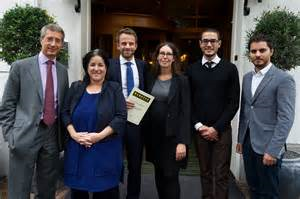 Today, REDRESS was shortlisted for the Guardian Charity Awards 2013.

For 21 years, the prestigious awards have showcased excellence among small and medium-sized charities that are delivering practical solutions to present-day problems and which “tend to be overshadowed by big players of the voluntary sector”.

As the Guardian puts it, “in terms of innovation, flexibility and reach into communities, it’s very often the case that small is beautiful.”On this occasion, only 30 charities were shortlisted out of 1,300 nominations.

“We are delighted with the news – this recognition of REDRESS is a symbol of solidarity with survivors of the most horrendous abuses, and all the people who provide them with much needed support with limited resources,” said Sir Emyr Jones Parry, Chair of REDRESS.

REDRESS was founded in London in 1992 by Keith Carmichael, a British torture survivor. It now works globally to help survivors of torture and related crimes obtain justice and other forms of reparation, including public acknowledgement, prosecution, compensation and rehabilitation. Our clients include human rights defenders, political activists, civilians targeted in armed conflicts and other marginalised groups vulnerable to abuse in all regions of the world. Thousands of such survivors also live in the UK. These include refugees as well as UK nationals tortured whilst working or vacationing abroad.

Survivors tend to have specific vulnerabilities, including physical and psychological trauma, and are frequently perceived as criminals, dissidents or terrorists. REDRESS believes that justice is a right, and the clearest route to restore what torture destroys: dignity, self-worth and trust in society. Justice helps survivors move beyond disadvantage.

REDRESS’ objectives are therefore to obtain justice for survivors of torture, to hold accountable the governments and individuals who perpetrate torture, to develop the means of ensuring compliance with international standards and to secure remedies for victims.

Five winning charities will be announced in December 2013. Click here for more information.