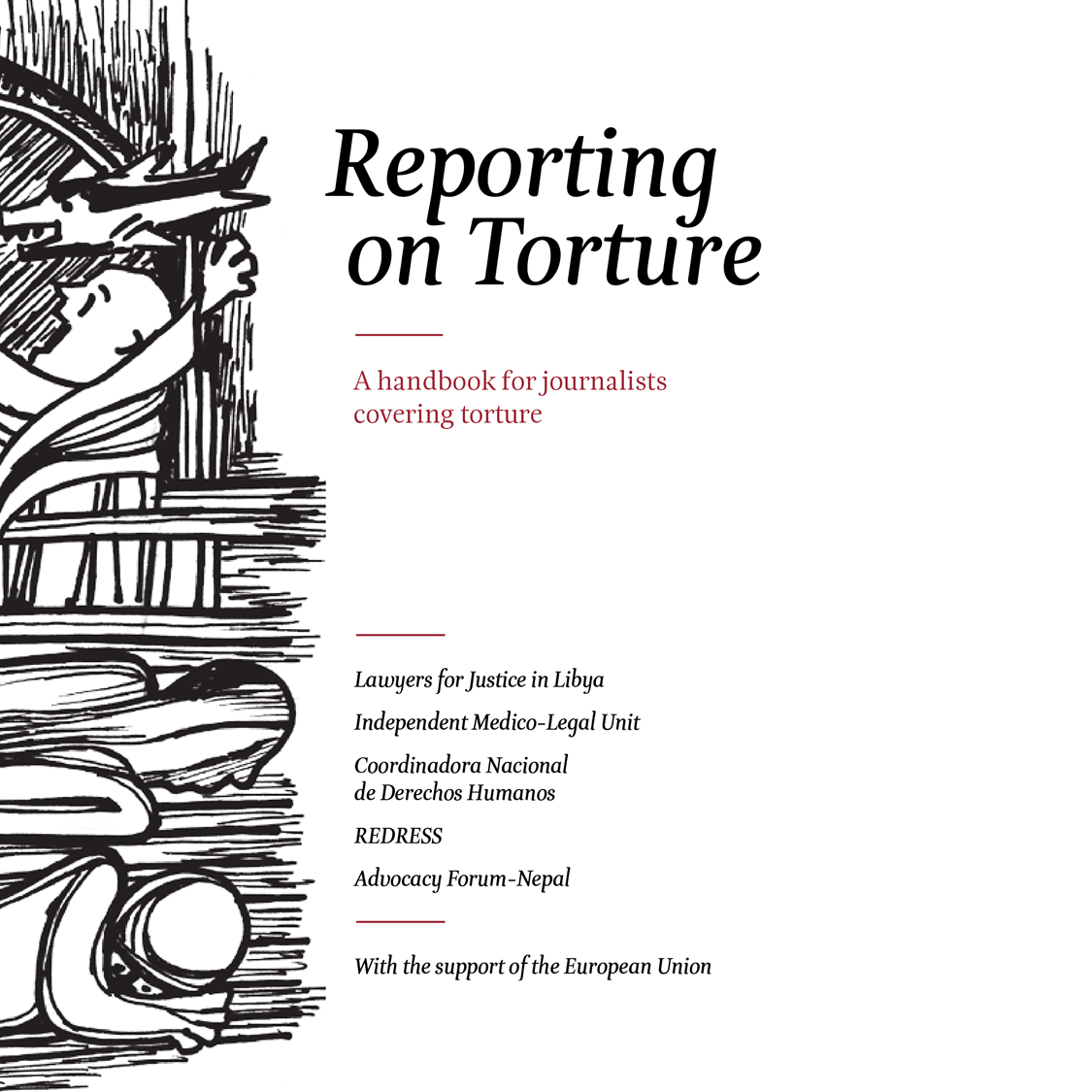 A new handbook launches today, on the United Nations International Day in Support of Victims of Torture, to support journalists who report on torture. The ‘Reporting on Torture’ handbook provides accurate, up-to-date information and guidance in four languages (English, Arabic, Spanish and Nepalese) to help journalists cover the subject in detail, regardless of their experience.

The handbook is authored jointly by five human rights organisations working to address the scourge of torture in a range of countries around the world: Advocacy Forum-Nepal (AF), la Coordinadora Nacional de Derechos Humanos in Peru (CNDDHH), the Independent Medico-Legal Unit in Kenya (IMLU), Lawyers for Justice in Libya (LFJL), and REDRESS in the UK.

The handbook is the product of more than two decades of experience that the five organisations have in interviewing and assisting thousands of torture survivors in the areas of litigation, rehabilitation, advocacy and training.

With the help of the handbook, the authors seek to encourage increased reporting on this grave international crime, and offer ongoing support to journalists in the vital role they play in breaking the silence and raising awareness about torture, a crime that thrives behind the scenes.

While torture is universally prohibited in international law, it remains highly prevalent today. Torture and ill-treatment at the hands of state officials have been recently recorded in 141 countries in every region of the world. [1]

Through accurate reporting, journalists can increase awareness of the universal prohibition of torture and of the challenges that may be preventing survivors from obtaining justice. Journalists can also provide important insights into the impact of torture on the survivors and their communities.

“We hope that through increased reporting on this grave international crime, there will be greater public understanding of the seriousness of torture and its impact on survivors, and this will generate more public resolve to eradicate torture in all its forms, no matter where it happens. We hope this will ultimately make a difference to the people whose lives are torn apart by this cruel and inhumane practice.”

The ‘Reporting on Torture’ handbook explains states’ obligations to prevent, prohibit and respond to torture allegations. It also details the impact of torture on victims and provides guidance to journalists on minimising the risks they may face when reporting on torture and on how to safely and appropriately interview and interact with torture survivors.

To draw attention to the importance of reporting on torture, the authors are holding several events.

CNDDHH is holding a workshop with journalists this week in Lima, Peru, to coincide with the International Day in Support of Victims of Torture, and will also present the handbook during an event at Universidad Antonio Ruiz de Montoya in August 2016.

Also today, Advocacy Forum is holding a journalist reception in Kathmandu to introduce the handbook to attendees alongside the launch of a report on the prevalence of torture in Nepal. In July, IMLU will be holding journalist training workshops in Kenya while LFJL and REDRESS will hold a media event later this year in London.

For further information or to arrange an interview, please contact:

Advocacy Forum-Nepal (AF) is a leading non-profit, non-governmental organization working to promote the rule of law and uphold international human rights standards in Nepal. Since its establishment in 2001, AF has been at the forefront of human rights advocacy and actively confronting the decades-old culture of impunity in Nepal. It has done so by systematically documenting human rights abuses, monitoring detention centres and formally building court cases. It has also been involved in capacity development of the victims themselves and high level policy advocacy aimed to create effective institutions and legal and policy frameworks necessary for the fair and effective delivery of justice.

La Coordinadora Nacional de Derechos Humanos de Perú (CNDDHH) has been a primary institution of reference in Latin America since its establishment in 1985. It has Special Consultative Status before the Social and Economic Council of the United Nations (UN) and is accredited to participate in the activities of the Organization of American States (OAS). It is a network of 79 civil society organisations working towards the defence, promotion and education of human rights in Peru. Its mission is the promotion of a culture of comprehensive human rights and the consolidation of democratic institutions, with one of its main objectives being to end the practise of torture in Peru and to empower survivors and their families and communities. They have experience in litigation of torture cases at the domestic and supranational levels.

The Independent Medico-Legal Unit (IMLU) is a Kenyan governance, health and human rights non-profit organization, whose vision is A Just World Free from Torture. Their work is underpinned by a holistic approach involving litigation, medical and psychosocial rehabilitation of survivors of torture, monitoring government adherence to its human rights obligations and advocacy for policy, legal and institutional reforms.

Over the last two decades they have assisted over 4,000 victims of torture, cruel, degrading and inhuman treatment through the support of their national networks of professionals: doctors, trauma counsellors, lawyers, human rights monitors and journalists.

Lawyers for Justice in Libya (LFJL) is an independent non-governmental organisation and charity, incorporated for the public benefit in order to defend and promote human rights in Libya. Through its work in the fields of national and international advocacy, human rights education, legal reform, strategic litigation, and transitional justice, LFJL seeks to become a catalyst, during the transitional period and beyond, for the establishment of a state based on the rule of law and democracy.

REDRESS champions survivors’ fight for justice and seeks to expose the scourge of torture. REDRESS helps torture survivors from around the world to obtain justice and reparation by providing free legal assistance to individuals and communities, advocacy and capacity building. It works with survivors to help restore their dignity and to make torturers accountable. REDRESS prioritises the interests and perspectives of survivors in all aspects of its work. The highest priority in decisions and interventions is given to promoting survivors’ wellbeing and the avoidance of further traumatisation. It has successfully litigated on behalf of survivors at the domestic and international levels.