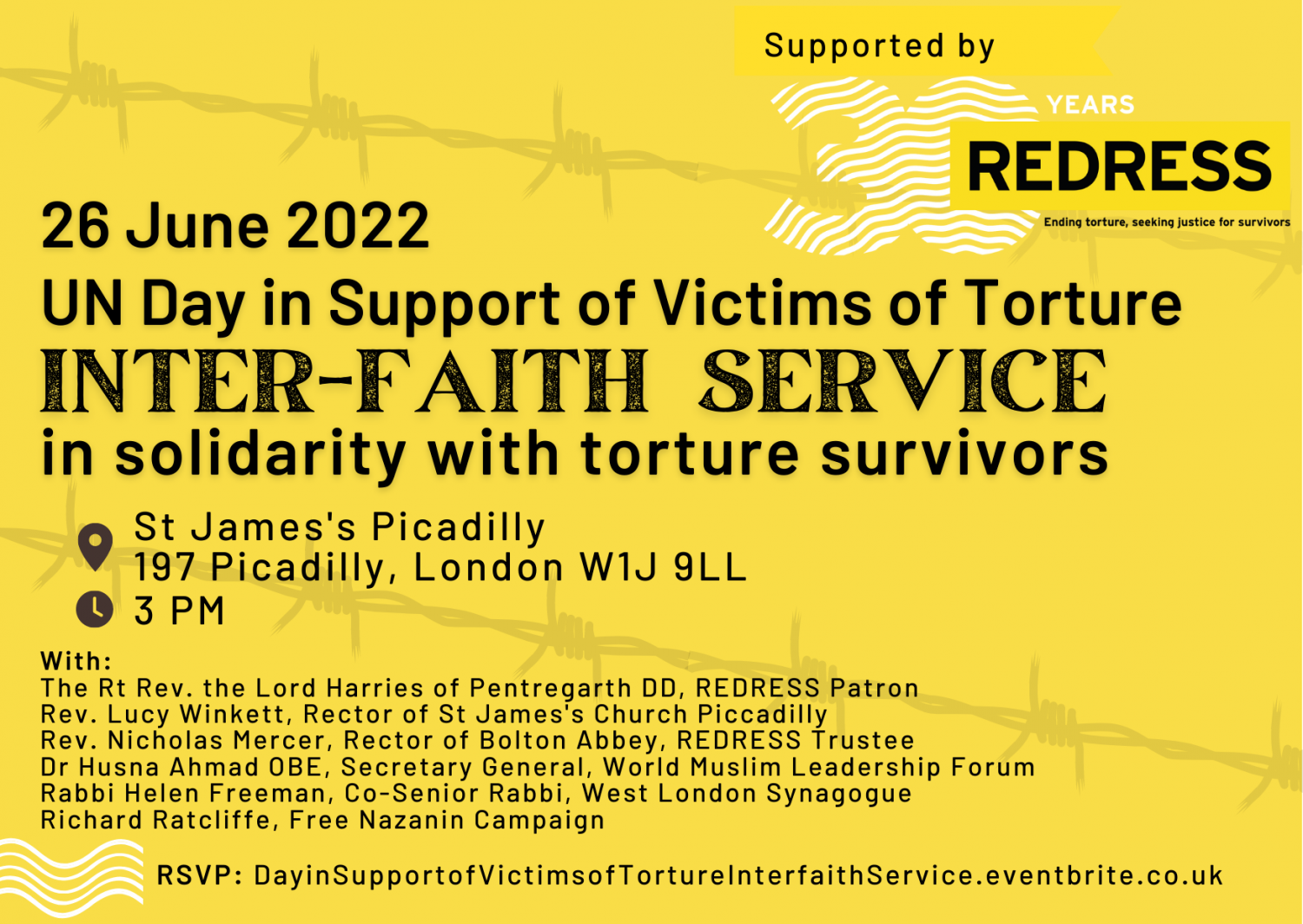 Solidarity in Support of Torture Survivors on 26 June

An inter-faith service will be held at St James’s Church Piccadilly in London to commemorate 26 June with a service of solidarity in support of victims and survivors of torture.

The service will be led by the Rt Rev. the Lord Harries of Pentregarth, former Bishop of Oxford and a Patron of REDRESS; Rev. Lucy Winkett, rector of St James’s Church Piccadilly, and Rev. Nicholas Mercer, rector of Bolton Abbey in North Yorkshire and a Trustee of REDRESS, which is supporting the service. Rev. Mercer is a former Lieutenant Colonel in the British Army. As the senior military legal adviser to the 1st Armoured Division during the Iraq war of 2003 he became an outspoken critic of the use of torture in Iraq. He was named Liberty Human Rights Lawyer of the Year 2011-2012 for his work for prisoners of war in Iraq. Dr Husna Ahmad OBE, Secretary General of the World Muslim Leadership Forum, and Rabbi Helen Freeman, West London Synagogue, will be among the leaders of other faiths who will participate in the service.

Testimonies from survivors of torture will also be read during the service and Richard Ratcliffe, the husband of Nazanin Zaghari-Ratcliffe, who was unlawfully detained in Iran for nearly six years, and tortured, before being released on 16 March, will talk about his tireless campaign to free his wife, and his family’s ordeal. REDRESS has acted as the legal representative of Nazanin and Richard Ratcliffe since 2016, raising her case before UN bodies and the UK government.

The service will be held on Sunday 26 June, the United Nations International Day in Support of Victims of Torture, an important day in the global fight against torture. It was on this day the landmark UN Convention against Torture came into force, enshrining in a treaty that freedom from torture, like the right to life and protection from slavery, is an absolute right, which exceptions not even permitted in cases of war or a state of emergency.

On 26 June we express our solidarity with, and support for, the thousands of victims and survivors of torture and their loved ones who have endured such suffering. We also reaffirm our collective resolve to end this inhuman practice. Sadly, almost 35 years after the Convention against Torture entered into force, torture is still prevalent in too many countries, including many that have ratified the Convention. Many victims are also unable to realise their right to reparation and perpetrators are rarely held to account due to a myriad of challenges.

REDRESS is an international human rights organisation that delivers justice and reparation for survivors of torture, challenges impunity for perpetrators and advocates for legal and policy reforms to combat torture and provide effective reparations. This year, REDRESS will celebrate 30 years since its founding on 10 December 1992. To mark the occasion, REDRESS will be holding a series of events from June 2022 to June 2023.

While REDRESS is a non-religious organisation, we are supported by a diverse range of groups and individuals of different faiths. We welcome people of all faiths who share our vision of a world without torture and support our efforts to seek justice for survivors.