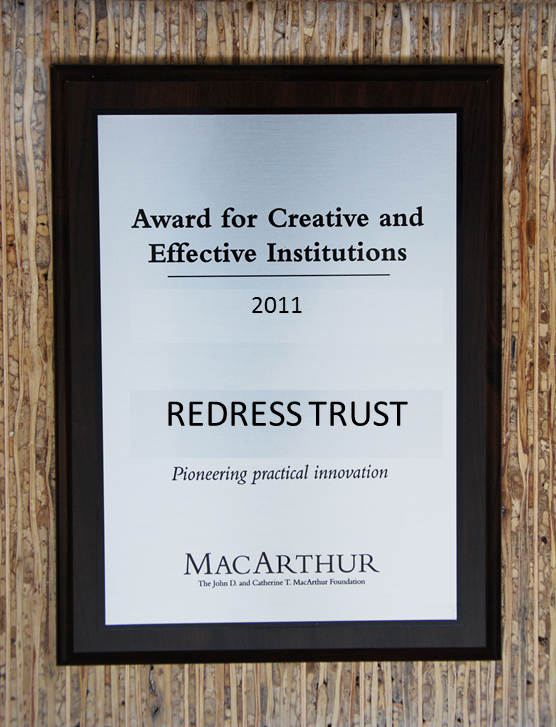 REDRESS, the legal charity that fights for the rights of victims of torture and violence, is
delighted by today’s announcement that it has been chosen to receive the prestigious MacArthur Award for
Creative and Effective Institutions.

The organisation is to receive a $500,000 grant from the American philanthropic foundation to support its work seeking justice for the victims of conflict-related violence in countries around the world.

Carla Ferstman, Director, said today: “We are honoured and thrilled that our work has been recognised as worthy by an institution of such renown as the MacArthur Foundation. Working in post-conflict contexts is one of our most important activities. The victims of torture, rape, and other violence perpetrated during armed conflict are often the most vulnerable: children, women and displaced persons. They have a right to redress and reparation under international law and this award will help us to help them find justice.”

REDRESS fights against torture by holding perpetrators and complicit governments accountable, promoting compliance with international law, and helping victims gain greater involvement in national and international justice processes including the International Criminal Court. The London-based charity files legal cases and advocates on the ground for affected individuals and communities.

Conflict-affected countries where REDRESS has intervened on behalf of vulnerable people include Sudan, Nepal, Uganda and Democratic Republic of Congo. REDRESS and its partners filed a complaint with the African Commission on Human and Peoples’ Rights on behalf of people who were beaten, tortured and killed at the Soba Aradi camp near Khartoum in Sudan. The incident, which occurred as police tried forcibly to relocate thousands of families, is now being examined.

In Nepal, REDRESS is helping communities affected by torture, forced disappearance and killings during the recent conflict. They now have a voice thanks to claims filed before the United Nations’ Human Rights Committee by REDRESS and its local
partners. In Uganda and Democratic Republic of Congo REDRESS has strengthened local capacity to address critical conflict-related issues such as violence against women and witness protection. By its actions REDRESS hopes to prevent further acts of torture and crimes against humanity and encourage countries and officials to end such criminal activity.

REDRESS is one of 11 award winners announced today by Robert Gallucci, President of the John D. and Catherine T. MacArthur Foundation. Mr Gallucci said: “These exceptional organisations effectively address pressing national and international challenges and they have had an impact that is disproportionate to their small size. The MacArthur Foundation is proud to recognise them.”

REDRESS was founded in 1992 by Keith Carmichael, a torture survivor, to champion the right of victims to
acknowledgement of their suffering and legal redress such as compensation.

As well as working to help the victims of conflict REDRESS brings legal cases on behalf of individuals who
have been mistreated by agents of their own or foreign governments. It advocates for the greater application
of universal jurisdiction as a means bringing perpetrators of torture to account as well as for increased victim
participation in the proceedings of the International Criminal Court and internationally recognised tribunals
such as the Extraordinary Chambers of the Courts of Cambodia.

Torture is defined under international law as the calculated physical and psychological assault on an
individual by a public official or others acting on behalf or with the consent of a public official.
Find out more about REDRESS at www.redress.org

Read the MacArthur Foundation’s statement on the awards and find out more about the organisation.