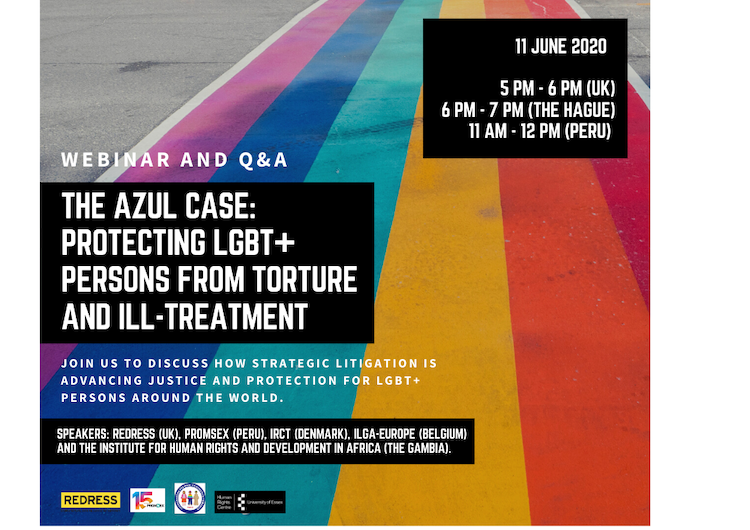 Join us to discuss how strategic litigation is advancing justice and protection for LGBT+ persons around the world.

Strategic litigation has undoubtedly contributed to bring about legal and social changes that have protected and advanced LGBT+ rights around the world in recent decades. However, more than 70 countries still criminalise same-sex relations between consenting adults or certain forms of gender expression.

Structural discrimination often turns into violence. Forms of violence against the LGBT+ community that amount to torture and ill-treatment include violent arbitrary arrests, forced medical examinations, ‘corrective rapes’, beatings and conversion therapy, a practice that aims to ‘cure’ or ‘repair’ an individual’s sexual orientation or gender identity.

Changes in laws and policies are needed to protect the fundamental rights of LGBT+ people. They can help uproot deep-seated social stereotypes and ensure lasting equality. In recent years, strategic litigation of LGBT+ cases has contributed to ensure full recognition and implementation of human rights for everyone, irrespective of their sexual orientation or gender identity.

The European Court of Human Rights has held, for example, that States have a positive obligation to provide some means of recognising same-sex couples, has reaffirmed the importance of protecting freedom of assembly and expression for vulnerable groups like the LGBT+ community, and has recognised the heightened obligation of States to protect against and effectively investigate violence motivated by hate combined with considerations of sexual orientation or gender identity.

Within the Inter-American System, both the Commission and Court have been at the forefront of the protection of LGBT+ rights. The Commission has established the Rapporteurship on the Rights of LGBTI Persons, has documented the situation of LGBT+ rights in the continent, and has decided and referred to the Court several ground-breaking cases. In turn, the Court has used its advisory and contentious jurisdiction to determine the scope of the American Convention in protecting LGBT+ rights, as illustrated by its Advisory Opinion 24/17 on Gender identity, and equality and non-discrimination with regard to same-sex couples, and cases like Atala Rifo and daughters v. Chile and Duque v. Colombia.

On 12 March 2020, in its most recent ruling in this area, in the case of Azul Rojas Marín and Another v. Peru, the Inter-American Court of Human Rights found Peru responsible for the arbitrary detention and torture of Azul Rojas Marín. Azul, who is a transgender woman who identified then as gay, was raped and beaten by police officers in Peru in 2008.

The Azul case, litigated for 11 years by human rights organisations REDRESS, PROMSEX and the Coordinadora Nacional de Derechos Humanos (CNDDHH), is the first case of LGBT+ discriminatory torture ever decided by a human rights court worldwide. It establishes key parameters and standards for all States to identify and effectively investigate such cases.

REDRESS, PROMSEX, the CNDDHH and the University of Essex are convening this webinar to consider how this case and others could help us to further develop the protection of LGBT+ persons from torture and ill treatment.