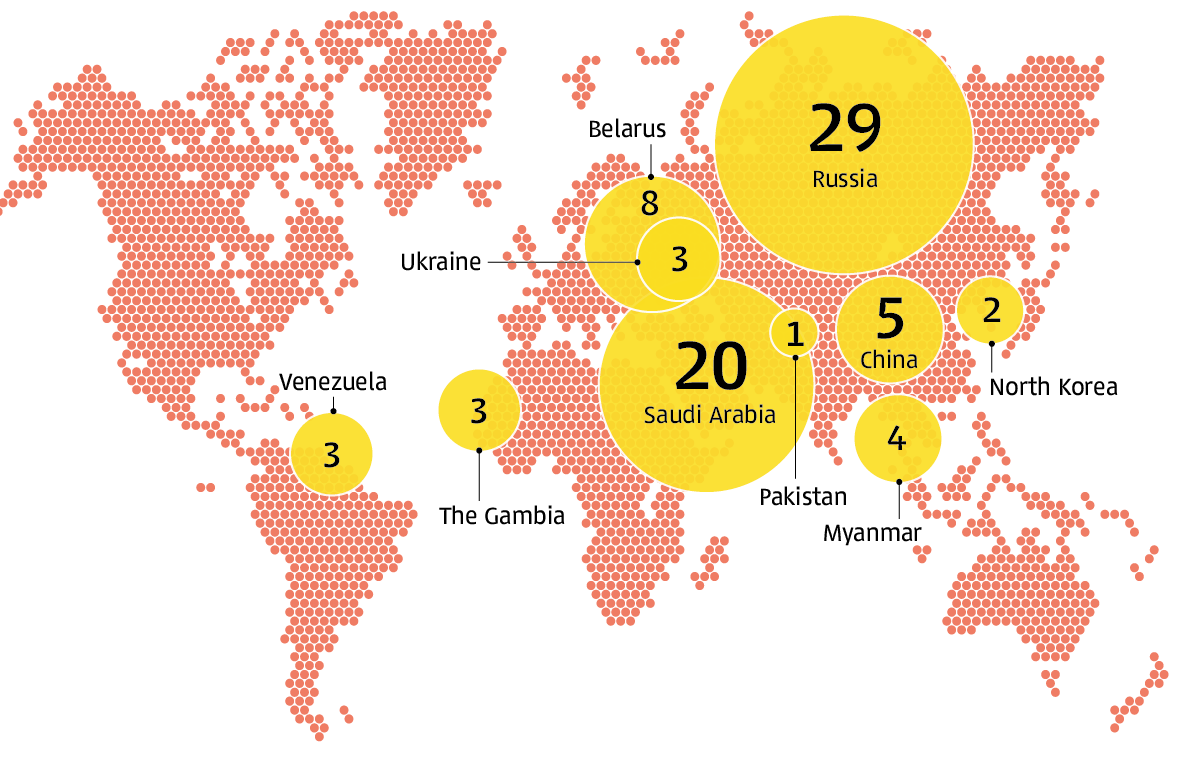 As the UK’s human rights sanctions programme marks its first anniversary, how has the Government used its new powers? Who has been sanctioned, where, and why?

Launched with fanfare one year ago on 6 July 2020, the UK’s Global Human Rights Sanctions regime gave the Foreign Secretary the ability to sanction persons implicated in human rights abuses anywhere across the globe. Announcing the programme, Dominic Raab asserted, “This is a demonstration of Global Britain’s commitment to acting as a force for good in the world.”

Often referred to as ‘Magnitsky sanctions’, in honour of Russian whistle-blower Sergei Magnitsky, the sanctions impose asset freezes and travel bans on individuals and entities involved in torture, forced labour, or violations of the right to life. The UK’s regime follows similar programmes enacted by the US and Canada in recent years. A separate UK Global Anti-Corruption Sanctions regime followed in April 2021.

The first anniversary of the UK Global Human Rights Sanctions regime provides an opportunity to examine how the Government has used its new tool for tackling human rights abuses, as detailed in this paper.

A data-driven analysis shows 78 designations arising from 11 situations of human rights violations. There was a notable skew towards designations for violations of the right to life and prohibition on torture, with fewer designations for forced labour. Six entities were sanctioned, including military holding companies and public security bureaus. Individuals designated ranged from politicians and military officials to family members of perpetrators and prison doctors.

How many designations were made? 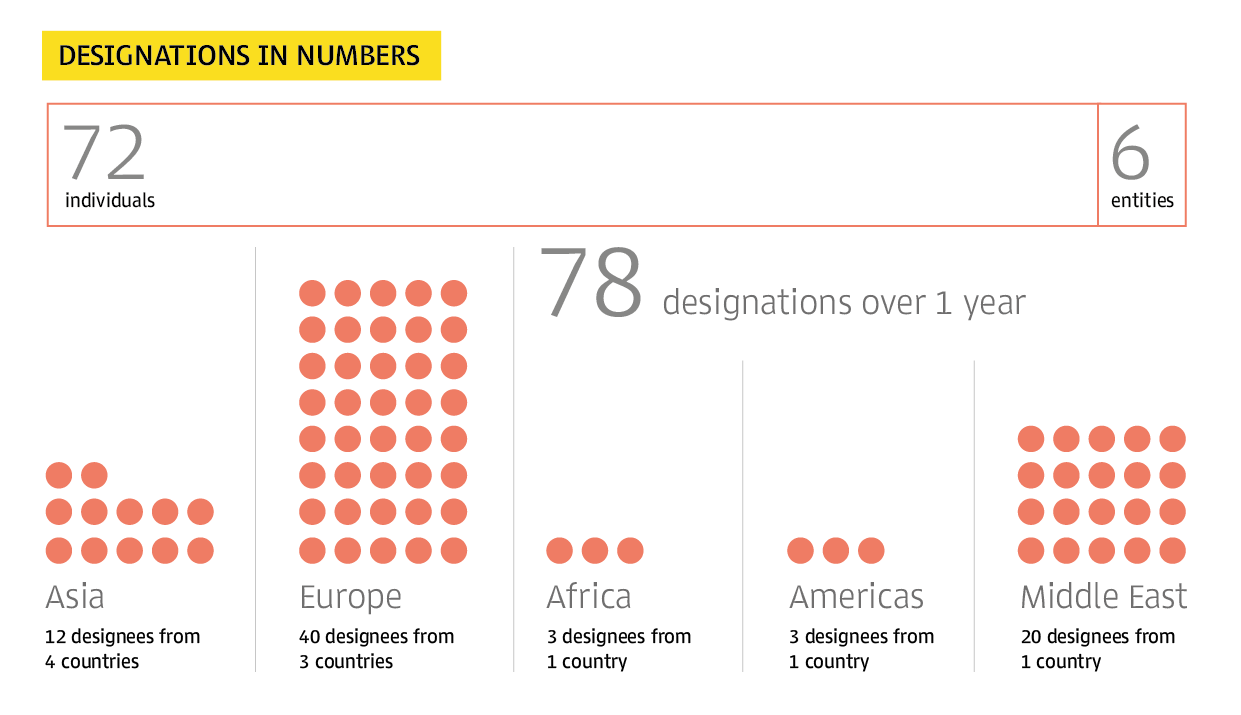 Which countries and situations were represented in the designations? 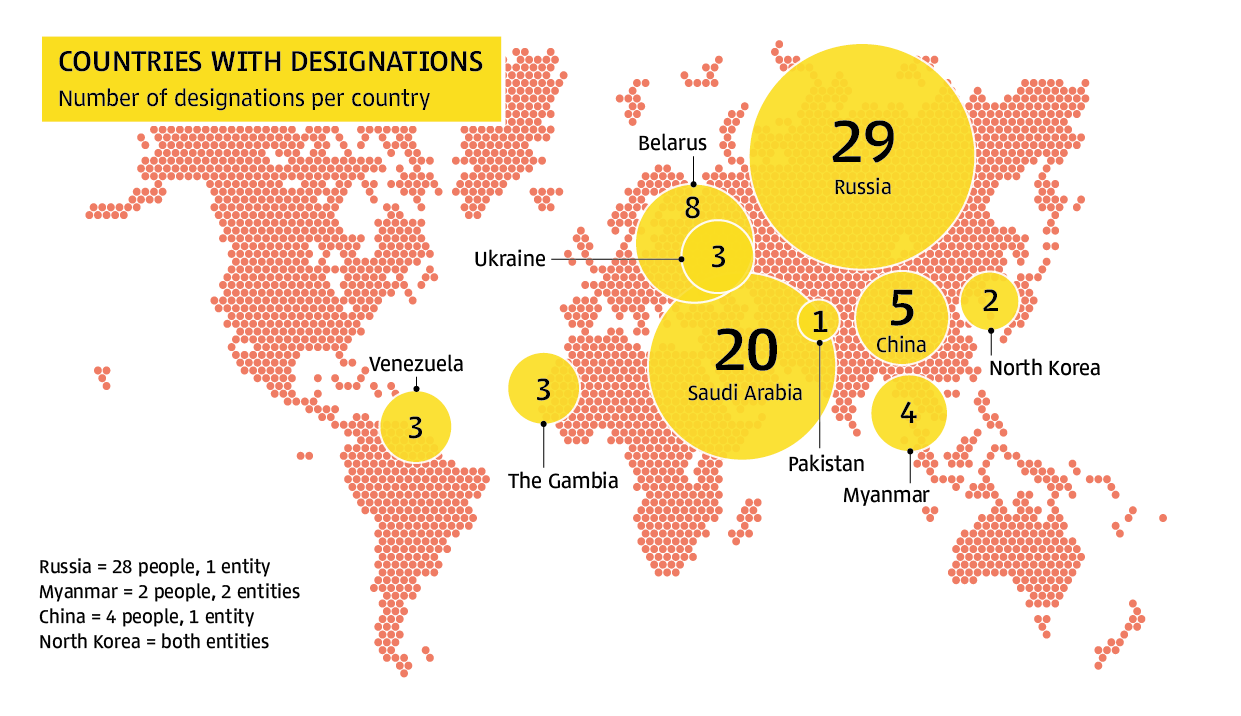 Russia had the most designees with 29, followed by Saudi Arabia, with 20. The Russia and Saudi Arabia designations were to some extent outliers, with a large number of designations arising from two high-profile human rights situations. 25 of Russia’s 29 designations arose from Sergei Magnitsky’s mistreatment and death. All of Saudi Arabia’s 20 designees were sanctioned for involvement in Jamal Khashoggi’s death.

Which roles and seniority levels were designated? 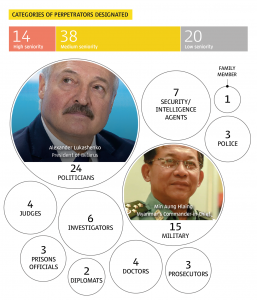 The roles of those designated were wide-ranging. The most common designees were military officials (15) – such as Min Aung Hlaing, Commander-in Chief of Myanmar’s Armed Forces – and politicians (24), including two current or former heads of state – such as President Alexander Lukashenko of Belarus.

Less common roles included one family member: the former First Lady of Gambia, Zineb Jammeh, was sanctioned for her association with former President Yahya Jammeh and covering up the illicit transfer of funds. Three doctors were sanctioned for their role in Sergei Magnitsky’s mistreatment, including failure to provide adequate medical care. And a Prosecutor-General in Ukraine was sanctioned for his office’s failure to adequately investigate torture and illegal use of force by Ukrainian law enforcement.

While the FCDO noted in its policy paper on designations, that it is ‘likely to give particular attention to non-state actors’, all Global Human Rights Sanctions designations in the first year related to violations by state officials.

In the same policy paper, the FCDO lists ‘the status and connections of the involved person’ as a relevant factor in determining who to designate. Of the individuals designated, 14 were high seniority, 38 were medium seniority, and 20 were low seniority.

Which rights were violated? 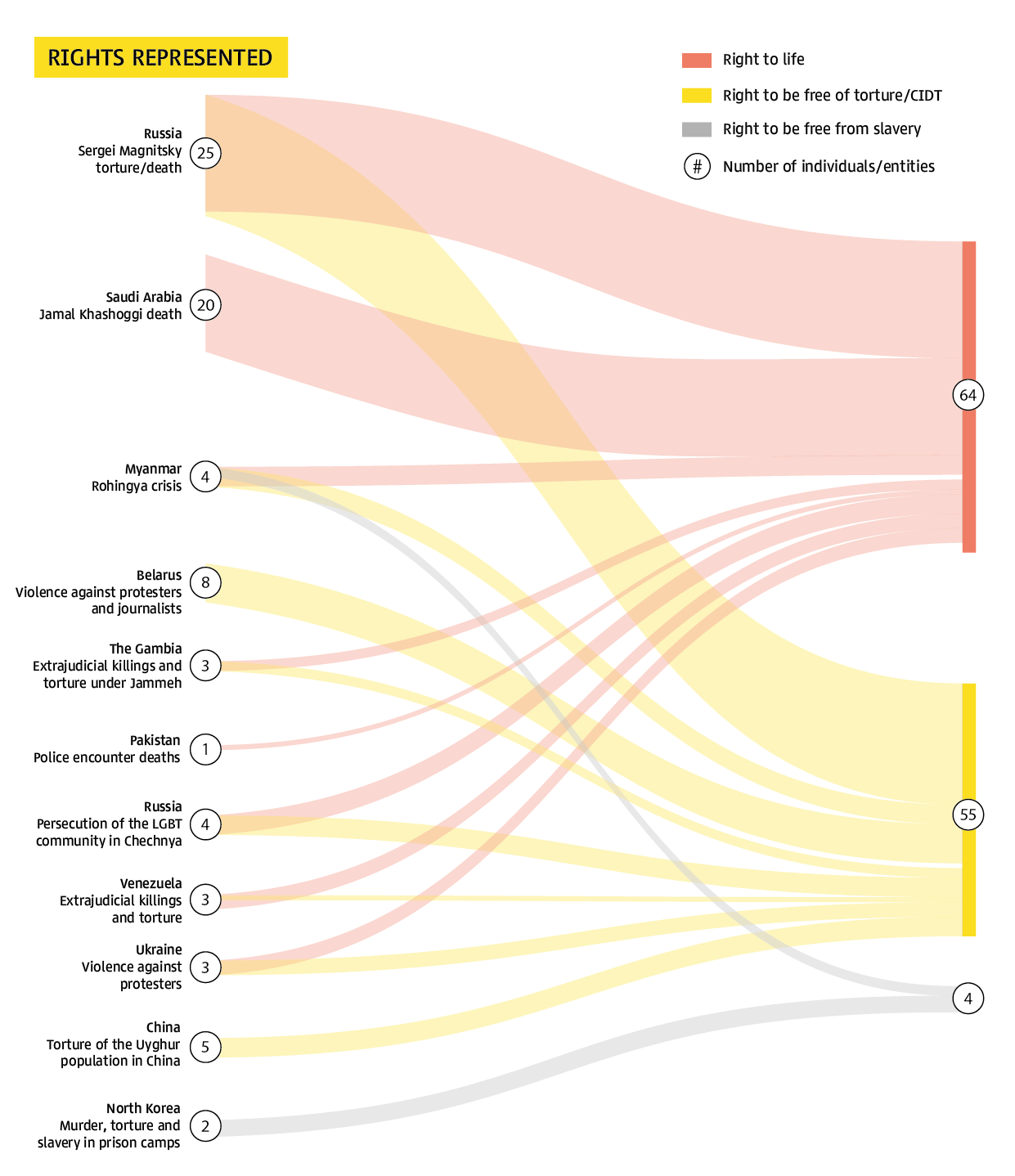 Key questions for the second year of the UK’s Global Human Rights Sanctions regime include: will the momentum of the first year be maintained, and built on now that the UK regime has made up for lost time? How will the parallel anti-corruption sanctions regime, launched in April 2021, fare?

There are also larger questions about the regime’s wider impact. Will the sanctions have their desired effect in ending ongoing violations and deterring future abuses? How will the UK Government respond if arbitrary counter-sanctions, already imposed by China, are adopted by other countries? Will international coordination increase as mooted new regimes in Japan, Australia and elsewhere come online? And what impact will the UK’s desire to strike trade deals around the world have on its willingness to deploy sanctions? The next 12 months will provide a more accurate picture of the UK’s sanctions ambition.

* A version of this analysis has been published by RUSI.