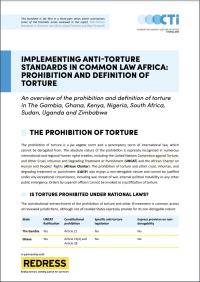 The factsheets review the anti-torture legal and regulatory frameworks in specific States in common law Africa but can be useful for other States and practitioners in the region more broadly. Specifically, the three factsheets analyse:

The extent to which the reviewed States have domesticated the definition and prohibition of torture, the implementation of safeguards against torture for persons deprived of their liberty, and the existing complaints and investigation mechanisms that receive complaints of and investigate allegations of torture and other ill-treatment in the eight States reviewed.