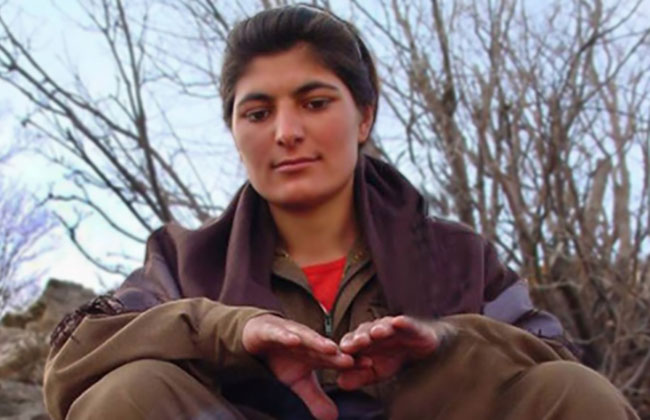 Zeinab Jalalian is a Kurdish women’s rights activist who was sentenced to death for “enmity against God” (moharebeh) by an Iranian court in 2008 in an unfair trial that lasted a few minutes. Her death sentence was commuted to life imprisonment in in 2011 and she is currently serving a life sentence in Iran.

Since 2000, Zeinab had been assisting women in Iraqi and Iranian Kurdistan by providing them education and social services. One of her last activities prior to her arrest on International Women’s Day in 2008, was a visit to a girls’ high school in Kamiaran, in Iranian Kurdistan, where she talked about the importance of International Women’s Day and distributed flowers to the students.

In 2008, Zeinab was sentenced to death for “enmity against God” (moharebeh) by Kermanshah Revolutionary Court for her alleged membership in the Party for Free Life in Kurdistan (PJAK), an armed Kurdish opposition group. She was not granted access to a lawyer during her summary trial and was sentenced to death despite the lack of evidence about her participation in the armed activities of the PJAK. Her death sentence was commuted to life imprisonment in 2011.

Before her trial, Zeinab spent eight months in pre-trial detention in a Ministry of Intelligence detention centre, where she says she was subjected to torture and ill-treatment to force her to confess to false charges. This included long interrogations, beatings while being blindfolded, flogging under her feet, threats of rape and solitary confinement.

The evidence also reveals she was tortured during a period of detention in Evin Prison in 2010.

Zeinab is currently serving a life sentence in Khoy Prison, western Iran. Prior to being transferred to Khoy Prison in early 2015, Jalalian was held in Dizel Abad Prison, near Kermanshah, where she received inadequate treatment for a series of ailments that her family believe result from the beating she has endured.

Zeinab has suffered from intestinal infections and internal bleeding. She also suffers from conjunctiva, but prison authorities have repeatedly refused to allow her access to an eye specialist outside of the prison to get the required surgical treatment. Since she has been jailed her family has only been able to visit her a few times .

On 5 March 2015, REDRESS and Justice for Iran filed a complaint with the UN Working Group on Arbitrary Detention (WGAD) urging this body to intervene on behalf of Zeinab.

Our complaint called on the Iranian Government to grant Zeinab a re-trial that complies with international standards for fair trial, including disregarding any evidence obtained under torture or other ill-treatment. We also requested that she is protected from further torture and ill-treatment and given access to all the necessary medical treatment, including urgent care for a degenerative eye condition that was causing her to lose her sight.

Our submission stated that Zeinab was targeted for her social activism and work promoting women’s rights in the Iraqi and Iranian Kurdistan.

On 18 April 2016, the WGAD issued a strong opinion on the case. It determined that Zeinab’s detention was arbitrary and urged Iran to release her immediately and offer her compensation.

The WGAD also expressed “grave concern” that her mental and physical integrity may be at risk of “irreparable harm”, requesting the Government of Iran to “take the necessary steps to remedy the situation of Ms. Jalalian without delay.”

“The Islamic Republic of Iran must put an end to defy the implementation of the opinion of the UN Working Group on Arbitrary Detention and respect her rights affirmed by the international experts,” said Shadi Sadr, Executive Director of Justice in Iran.

Almost 11 months after the WGAD issued its opinion, the Islamic Republic of Iran has failed to respond and Zeinab’s health and general well-being continues to deteriorate as she languishes in detention and virtual isolation.

On 7 March 2017, Justice for Iran and REDRESS provided the WGAD with an update on Zeinab’s situation, and renewed their calls for this continuing gross violation of her rights to end.

The organizations told the WGAD that Zeinab continues to be denied access to vital medical treatment she needs and has been subjected to further pressure to provide a recorded interview.

“The UN Working Group on Arbitrary Detention found that Zeinab’s continued detention is arbitrary, that it violates her basic rights. We are calling on the Islamic Republic of Iran to guarantee her safety, health and well-being and to release her from this interminable injustice,” said Carla Ferstman, REDRESS’ Director.