This report examines the success of litigation in pursuing justice for child victims of  sexual abuse by peacekeepers looking at cases in which victims and their representatives have turned to the courts to seek accountability and redress. Done jointly by human rights organisations Redress and the Child Rights International Network, the report concludes that child sexual abuse usually goes unpunished and few victims secure reparations. Drawing on 30 interviews with lawyers and experts around the world, the report identifies key obstacles that prevent the perpetrators of peacekeeper child sexual abuse from being held to account, and that prevent victims from obtaining redress. These include: the quality of investigations; immunities and the exclusive jurisdiction of troop-contributing countries; a lack of transparency in prosecution processes, particularly in military court martial processes; and the absence of a victim-centred approach. The report recommends a series of reforms to policies, practices and legislation in troop-contributing countries and the UN. It also identifies opportunities for future strategic human rights litigation.

On 20 January 2020, REDRESS and 12 other NGOs including FIDH, ECCHR, the International Commission for Jurists and Amnesty International sent a joint Letter to the Core Group and Co-Sponsoring States of the initiative for the creation of a new multilateral treaty on International Cooperation in the Investigation and Prosecution of the Crime of Genocide, Crimes against Humanity and War Crimes (Mutual Legal Assistance Initiative). The letter was sent in advance of the Informal Consultations that will be held in The Hague, next week, between 27-29 January 2020. The main issues we address relate to (1) the scope of the draft treaty - the crimes of torture and enforced disappearance which should be included in the main draft treaty as stand-alone crimes and not just as crimes against humanity or war crimes; (2) an enhanced role for victims and their rights; and (3) clarifying issues relating to asset recovery and disposal. 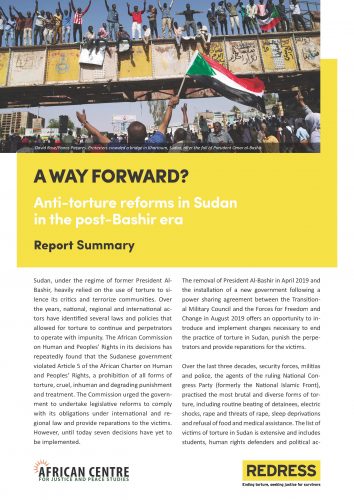 REDRESS jointly with seven other human rights organisations has published an open letter following a joint investigation by BBC Panorama and Sunday Times which found evidence that the Ministry of Defence and some elements within the Armed Forces had allegedly covered up evidence of war crimes in Iraq and Afghanistan. The letter from REDRESS, Freedom from Torture, Liberty, Rights Watch UK, Human Rights Watch, ECCHR, and the Rendition Project was sent on 20 November 2019 to the main UK political parties.

This submission to the UN Universal Periodic Review (UPR) of the United States of America focuses on the United States’ longstanding failure to provide effective remedy and redress, including medical care, and guarantee fair trials to the “High Value Detainees” who are still held in Guantánamo, including Mustafa Al-Hawsawi. It was made by REDRESS jointly with the World Organisation against Torture (OMCT) and the International Commission of Jurists (ICJ).