This briefing paper outlines eight recommendations to the UK government on confiscating frozen Russian assets and repurposing them for victims in Ukraine.

This briefing paper, jointly prepared by REDRESS, the Sudan Human Rights Monitor (SHRM), and the SOAS Centre for Human Rights Law, is based on 35 interviews conducted by SHRM in Khartoum, Sudan, and provides first-hand evidence of the nature and consequences of ongoing human rights violations for direct and indirect victims and the wider community. The findings document what has become a centrally planned and systematically implemented assault on the young and the future of Sudan. It has already taken an immense physical and psychological toll on the immediate victims, their friends, families, and whole communities. Notably, some of them have lodged complaints and pursued legal remedies. However, the lack of responsiveness of the authorities, and indeed ongoing commission of serious violations, demonstrates the complete lack of justice and accountability in Sudan.

This research paper from REDRESS and the SOAS Centre for Human Rights Law situates Sudan’s current political and human rights crisis within the broader historical context, demonstrating that the cyclical nature of Sudan’s post-independence, post-coup politics is closely linked to the absence of respect for the rule of law, human rights protections, and justice for past violations.

In this letter, REDRESS requests the UK government to engage civil society including victim and survivor groups on the repurposing of £2.5 billion ('the funds') following Roman Abramovich’s sale of Chelsea Football Club. It is reported that the funds will be forfeited to the UK government and earmarked for a charitable foundation to aid victims of the war in Ukraine. This presents a unique opportunity for the UK to have a profound impact on the lives of victims, ensuring their right to reparations is upheld. It will position the UK as a world leader on the repurposing of Russian assets to support victims. 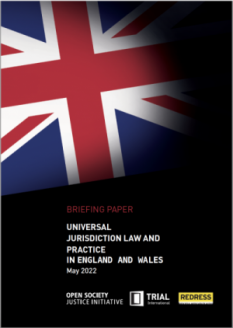 This briefing paper was written by TRIAL International in partnership with the Open Society Justice Initiative and REDRESS. It provides an overview of the national legal framework of England and Wales on universal jurisdiction, including statutory and case law, and its application in practice. It intends to contribute to a better understanding of domestic justice systems among legal practitioners who operate in the field of universal jurisdiction, to support the development of litigation strategies. It forms part of a series of briefing papers on selected countries.

In a letter ahead of the Council’s 50th session (13 June to 8 July 2022), REDRESS joined other non-governmental organisations in calling on the UN Human Rights Council to support the adoption of a resolution that ensures continued attention to Sudan’s human rights situation through enhanced interactive dialogues at the Council’s 52nd and 53rd regular sessions. 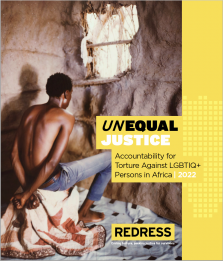 This report summary highlights the key findings and recommendations of our report Unequal Justice: Accountability for Torture against LGBTIQ+ Persons in Africa. The report sheds light on the violence and torture suffered by LGBTIQ+ people in Africa and the challenges that victims face to secure accountability for these crimes. It examines the situation in 11 countries in Africa - Algeria, Angola, Botswana, the Democratic Republic of the Congo, Ghana, Kenya, Malawi, Morocco, Mozambique, Uganda, and South Africa - but the findings of the research are equally applicable to other contexts in Africa. The report outlines specific proposals to States, African human rights bodies, and civil society to improve the current situation.