REDRESS and the People's Legal Aid Centre (PLACE) made this submission as part of the Universal Periodic Review (UPR) of Sudan. The submission focuses on progress made by Sudan's transitional government towards the effective prohibition of torture and other human rights abuses, as well as the additional steps needed to ensure their non-repetition and accountability for past violations, 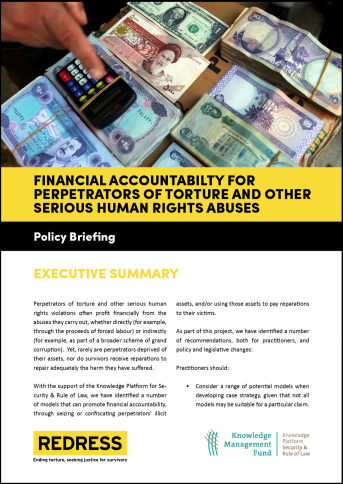 Perpetrators of torture and other serious human rights violations often profit financially from the abuses they carry out, whether directly (for example, through the proceeds of forced labour) or indirectly (for example, as part of a broader scheme of grand corruption). Yet, rarely are perpetrators deprived of their assets, nor do survivors receive reparations to repair adequately the harm they have suffered. With the support of the Knowledge Platform for Security & Rule of Law, we have identified a number of models that can promote financial accountability, through seizing or confiscating perpetrators’ illicit assets, and/or using those assets to pay reparations to their victims. 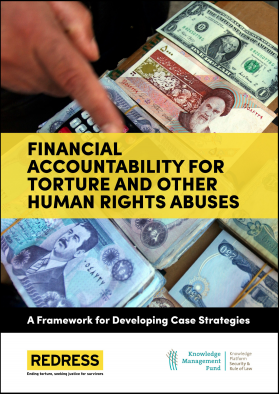 REDRESS’ Framework for Financial Accountability for Torture and Other Human Rights Abuses  is designed to be used by NGOs and practitioners around the world that act on behalf of victims. It aims to serve as a tool to help identify, develop and evaluate potential case strategies for pursuing financial accountability for torture and other serious human rights abuses.  The Framework identifies a range of legal and advocacy models that promote financial accountability, and challenge the financial impunity that some perpetrators enjoy. A core objective is to use perpetrators’ assets to fund reparations for their victims where appropriate mechanisms permit this.

As the European Union was expected to announce on 22 March 2021 sanctions against senior Chinese officials and entities linked to human rights violations in the Xinjiang Uyghur Autonomous Region of China, REDRESS wrote on 19 March 2021 to the UK Foreign Secretary Dominic Raab, calling for urgent action from the UK government in imposing similar sanctions. REDRESS’s new letter to the Foreign Secretary highlights the anticipated EU sanctions, and urges the UK to join its international allies in sanctioning Chinese officials. 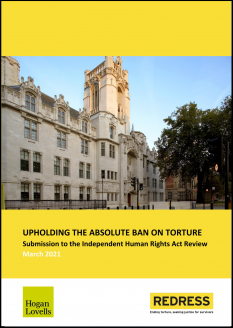 This submission was prepared jointly by REDRESS and Hogan Lovells in response to the call for evidence of the Independent Human Rights Act Review published 13 January 2021. The principal aim of this submission is to share an understanding of how the Human Rights Act 1998 has, through its existing framework, effectively implemented the absolute prohibition of torture and inhuman or degrading treatment or punishment, as set out in Article 3 of the European Convention on Human Rights. However, the Article 3 prohibition cannot properly be understood in isolation from the other ECHR rights, or from other human rights obligations accepted by the UK. Accordingly, where responses to questions in the call for evidence require, a holistic view is offered.

In this Bulletin, we draw attention to the plight of British citizens detained abroad, such as Nazanin Zaghari-Ratcliffe and Jagtar Singh Johal. We also present our new five programmes - Justice, Reparation, Dissent, Discrimination and Solidarity - areas that align with our historical achievements and build on REDRESS’s established strengths. The Bulletin also provides the latest updates on our advocacy campaigns, publications and policy work during September 2020-February 2021, including an emerging area of work in which we have been engaging to respond to the connection between grand corruption and human rights abuses by taking action to seize the corrupt asset of high-profile human rights abusers and, where possible, have them assigned as reparations for the benefit of their victims.

The Juba Peace Agreement and the 2019 Constitutional Document commit Sudan’s transitional government to making a series of critical human rights reforms. A set of legislative amendments in November 2019 and July 2020 addressed key issues in Sudan, including female genital mutilation, cooperation with the International Criminal Court, and torture. While these reforms were widely welcomed outside of Sudan as a sign of the government’s commitment to addressing legislative shortcomings as part of Sudan’s political transition, more is needed.

This policy briefing suggests several priority areas for reform, including the review of security and judicial sector policies and practices, the criminalisation of torture and enforced disappearances in Sudan’s criminal code in conformity with UNCAT, and human rights training for government actors in key sectors, among others. These steps should be taken in collaboration with the whole spectrum of stakeholders including civil society, victims, communities, and marginalised groups in Sudan.